Adele breaks down in tears during her concert, dedicates the whole show to Orlando victims

A the world mourns one of the worst mass shooting in history, Adele opened up about her emotional connection to the LGBTQA community and dedicated her Sunday, June 12, concert in Antwerp, Belgium, to the victims of the fatal shooting at a gay nightclub in Orlando, which occurred earlier that same day.

“I’d like to start tonight by dedicating this entire show to everybody in Orlando and Pulse nightclub,” the “Hello” singer, 28, told the crowd as her eyes welled up with tears. “The LGBTQA community, they’re like my soulmates since I was really young, so I’m really moved by it.” 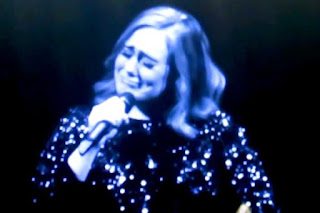 In an attempt to relieve tension and lighten the mood at her show, Adele joked, "I don’t know why I’m crying already, because most of tonight is pretty miserable because my songs are f--king miserable."
Betting Tips on Whatsapp News Updates
Subscribe to Youtube
Related forums