Skeletons Of Chinese Soldiers Who Died In A War Are Returned Home After 60 Years. Photos

After over sixty years away from home, the remains of 28 Chinese soldiers are finally being returned to China. The soldiers fought alongside DPRK forces during the Korean war between 1950 and 1953 and are now set to be handed over to the Chinese Air Force today as part of their final journey home. 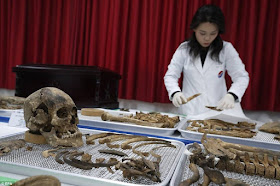 In 2013, the Chinese and ROK's governments reached an agreement on repatriating remains of Chinese soldiers excavated from Korean War battlefields.

So far the remains of 541 Chinese soldiers have been returned to China.