China's defence ministry has apologized after a poster celebrating the 68th birthday of the People's Liberation Army Navy was exposed as containing American ships and Russian planes.

The poster showed an image of the Liaoning, the country's first aircraft carrier - which was itself built in the Soviet Union and bought from Russia - and declared: 'Happy birthday, People's Liberation Army Navy!'

But military experts soon spotted that whoever had designed the poster had dropped several major clangers.

The jet which appears to be taking off from the deck of the carrier is in fact a Russian MiG-35 fighter aircraft, not a Chinese plane.

And worse still, considering the tensions between Beijing and Washington, the ships seen shadowing the Liaoning were US amphibious assault ships, not Chinese vessels.

Even the three Chinese fighter jets at the top of the poster are wrong. They are J-10s, which are used by the air force, rather than J-15s which are designed to take off and land on carriers.

The South China Morning Post reported the poster had been widely mocked by users of the social media site Weibo.

Defence ministry spokesman Yang Yujun said he was 'sincerely sorry' the image used was 'not meticulous'.

'The carelessness was with the editor, the responsibility is on the shoulders of the leadership,' he said ominously.

Chinese media website Huanqiu said it was the first time the defence ministry had ever admitted such a mistake and the South China Morning Post even claimed they had managed to turn a PR disaster into a positive story. 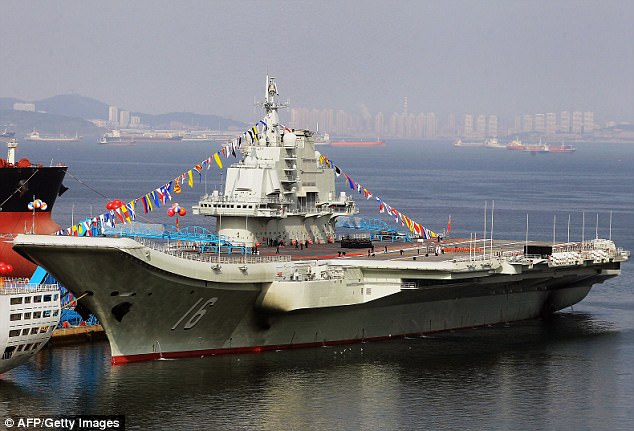