Groom Gets Stripped And Handcuffed To A Pole In Bizarre Wedding Tradition. Photos

A man in red underwear was seen being handcuffed to a traffic light pole with his head donned in silk stockings in east China’s Anhui on April 12, 2017. 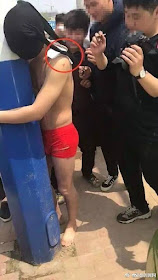 The man was reportedly a groom and just had his wedding ceremony earlier that day.

Stripped by his friends after the ceremony, the groom was dragged to the street and got handcuffed to the traffic light pole, as his friends tried to give him an unforgettable wedding day. 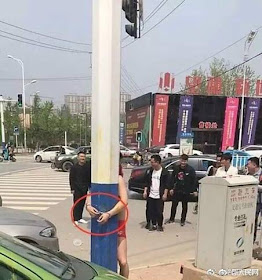 Yousef Gets Evicted From The Big Brother Naija Reality Show

Taaooma – Who Is The Dullard (Comedy Video)