On Day 38: Bisola And Bally Are Back With The Other Housemates

Did you watch Day 38 of the Big Brother reality TV show?

If you missed it we’ve got the highlights for you!

Bassey, Efe and Kemen woke up to their fingernails painted with red nail polish and were certainly not impressed! The culprits: Debie-Rise and TBoss. The two were up during the wee hours of the morning, Debie-Rise painted Kemen, Bassey and Efe, while TBoss took pictures. The girls had such a giggle, ThinTallTony woke up and caught them in the act.

When the guys woke up in the morning, they were shocked to find their fingernails painted. Efe, Kemen and Bassey discussed who they suspected to be responsible for this prank. “I saw you painting his (Bassey) fingers. You were laughing,” said Kemen.

ThinTallTony agreed that it was indeed Debie-Rise responsible for the latest prank saying, “I woke up and found you (Debie-Rise) painting Bassey’s fingers and laughing.”

“You two were the last people to get into bed. The two of you ran around the House taking pictures. You guys are rubbish prankers,” added Uriel.

Debie-Rise denied having anything to do with the latest prank. “Bassey, can you see that people are trying to come between us. Don’t worry, I got you. I can help you clean it,” Debie-Rise said, as she tried to convince them.


However, the other Housemates were still convinced she did it. 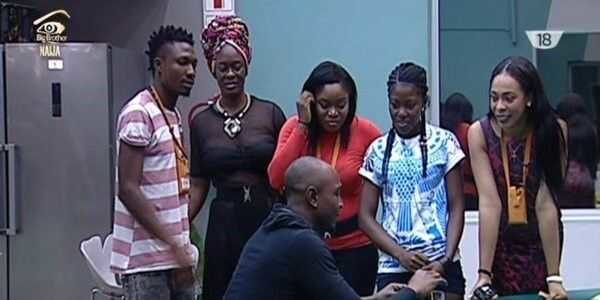 Two surprises in one morning! That’s how the Housemates’ morning looked like.

First, it was the surprise return of Bisola and Bally, who had spent a few days on a “beautiful island”, plus the surprise visit from TV personality IK Osakioduwa.

IK fetched Bisola and Bally from their island getaway, ushering them into the House and while the Housemates were still hugging and kissing the two in excitement, in came IK, sending the Housemates jumping with excitement.

IK wasted no time and got straight to the point saying, “You guys have a mad following. I love the spirit I’m seeing in the House. Look, there’s only so much you can do with the money but you have got to have a different plan from the rest of the gang,” he said.

He reminded them that they only had limited time to make an impact on the rest of the world out there. “In three months after Big Brother, the viewers will move onto something else. You have a month of fame and appearances now. Don’t wait until the end for you to make your move. You have to be like Ebuka. He had a plan from the onset and even said he would make something out of the experience from the House,” he added.

Of course, IK had to joke around with the Housemates, saying Nigeria had released its first flying car when the Housemates asked him for an update on what was happening outside the House.

“They’ve mass produced it. There is now night flights to Lagos,” he joked, much to the amusement of the Housemates.

As usual, the Housemates shared their aspirations, ending the visit by taking selfies with IK.

It’s Good to be back!

“It feels awesome to be back!” yelled Bally.

Bisola agreed with him saying, “It feels really good to be back,” after the Housemates asked where they had actually spent the last two days. 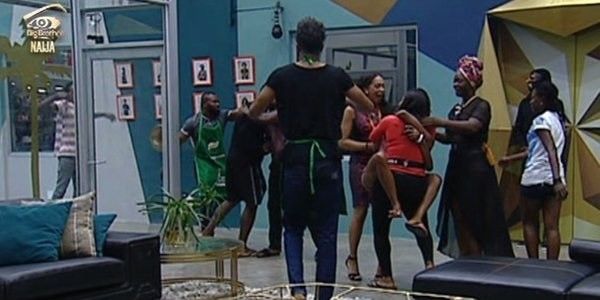 The two Housemates were ushered to an island during the Live Eviction Show on Sunday, where they were wined and dined, while they watched the other Housemates on the TV screen, without them knowing.

The Housemates had a lot of questions for the returned Housemates, with some asking if Fake Housemates Jon and Ese were really Evicted. Bally confirmed that they had actually been Evicted.

While sitting in the garden, Bisola and ThinTallTony talked about how much they missed each other. “I missed you a lot and I was watching you a lot,” Bisola admitted to ThinTallTony.

They further noted how they had learned a lot from Evicted Fake Housemate Jon, adding that he was the most knowledgeable in most discussions held in the House. The two spent the better part of the morning chatting and playing in the garden.

There was a gun, some paint, and a lot of screaming!

That pretty much sums up the Housemates’ afternoon, as they played a game of paintball. This was their first Task for the day, after a morning filled with several surprises.

Immediately after changing into comfortable clothes, in readiness for the Task, the Housemates convened in the Arena where HoH ThinTallTony paired them into five pairs.

He was paired with Uriel, Kemen with Marvis, Efe with TBoss, Bally with Debie-Rise and Bisola with Bassey. The Housemates took turns in their pairs, with one being the paintball shooter, while the other was the interactive part of the frame canvas and then vice versa, after a round of shooting.

First up were Bisola and Bassey. Bassey, the shooter, had her screaming, as he took shots at the canvas. Some of the shots landed on Bisola. She had her turn, as she too fired strong shots at the canvas, with some landing on Bassey. Next up were Efe and TBoss, who were followed by ThinTallTony and Uriel, Bally and Debie-Rise, then finally Kemen and Marvis.

Immediately after all pairs had taken turns in the shooting, Biggie wondered which team had the best artwork. A few names were mentioned by the Housemates before Biggie asked them to step away from the artwork.

New Lease of life for the Housemates

Today’s Diary Sessions kicked off with Biggie calling the Housemates in one by one, with TBoss taking the lead.

Soon as she was seated in the Diary Room, TBoss was asked how she felt about the return of Bally and Bisola she said she was happy. She admitted to being a little shocked at the unexpected nature of Big Brother’s twists, and she would love to see Miyonse and Gifty return to the House. She loved the paintball challenge and felt her team won the challenge, with Kemen and Marvis finishing second.

Marvis said the mood in the House was definitely lit since the return of Bisola and Bally. She thanked Biggie for bringing IK to the House as his visit was refreshing. She didn’t quite agree with some of the sentiments about Ese and Jon leaving too soon, as she reminded everybody that Soma and Miyonse also left early. When asked to name two Housemates she would love to see return, she named Soma and Jon.

ThinTallTony told Bigge that Ebuka’s warning of not being too analytical of the game has been a constant reminder in his mind so he has tried to contain his curiosity, however, he was still shocked albeit pleasantly at the return of Bally and Bisola. He admitted it all made sense why they couldn’t use the Arena for their morning exercises.

Bassey couldn’t contain his excitement levels as he thanked Biggie vehemently for bringing IK into the House earlier, saying it was like being in the presence of a demi-god. He said he was happy to see Bisola and Bally return and would love to see Gifty and CoCoIce return as well. With regards to the paintball Task, he told Big Brother that he believed his team won as his interpretation of the Task was all about making art.

Bisola couldn’t stop thanking Big Brother for the Paradise experience she got to enjoy with Bally. She was also grateful for the peripheral view of the House they enjoyed while in paradise as it helped her understand the House and the Housemates better. She believed by the mere fact of being on the show made her a winner as the show has given her a huge platform to springboard off. She said she would love to see Ese and Soma return to the House. When asked by Biggie to name the Housemates she would be least sad to see leave the House, she named TBoss, Kemen and Debie-Rise.

Uriel was shocked and pleased when Big Brother greeted her in her native dialect of Igbo. She told Biggie that her heart dropped when she saw Bally and Bisola return, she told Biggie how unfair it was for Evicted Housemates to be brought back into the House. But in a happier mood, she was happy with the great words of wisdom shared by IK during his visit. She stated that she felt Efe and TBoss won the paintball challenge.

Bally said the mood in the House seemed high as all the Housemates seemed ecstatic to have him and Bisola return to the House. He cited that BBNaija is a competition and though he missed some of the Evicted Housemates, he didn’t see any need for them to return to the House because he didn’t want any of them affecting his chances of winning the game. When asked by Biggie to name three Housemates who he would be least sad to see go, he named TBoss, ThinTallTony and Bassey; quickly adding that he had chosen these three names from a strategic perspective.

Kemen told Big Brother that he felt great and was content with the mood in the House as his fellow Housemates all seemed very cooperative lately. He felt very happy at the return of Bisola and Bally as he had asked for their return at yesterday’s Diary Session. He told Biggie that he felt his team won the paintball challenge as they had followed the instructions to the latter. He also added that he would love to see coCoIce and Soma return to the House saying “the more Housemates we have, the better”.

Debie-Rise told Biggie that the mood in the House was high now, especially after the return of Bisola and Bally. She also added that the visit of IK was very enlightening and she was grateful to big Brother for making it possible. When asked about the paintball challenge, she described it as painfully hilarious, and she also told Biggie that she felt her team won. 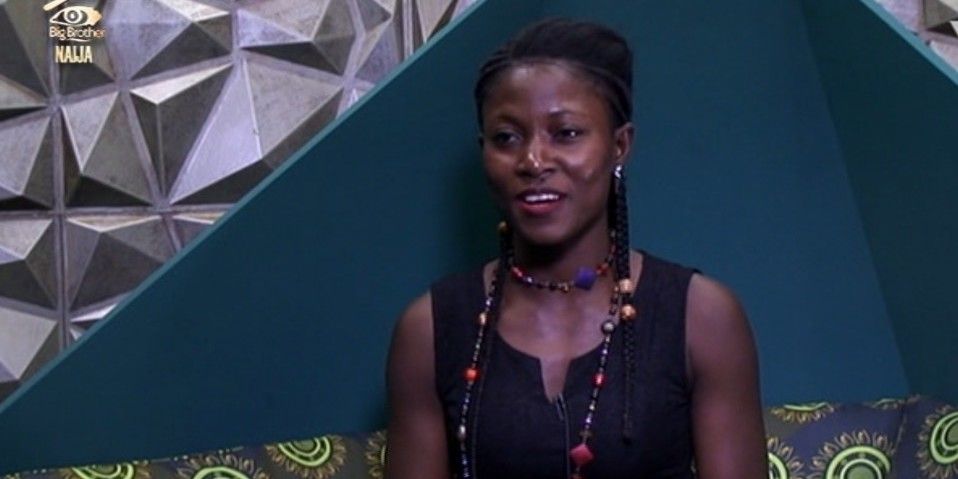