Residents of an Enugu community can finally breathe a sigh of relief and sleep with their two eyes closed after a deadly robber was recently apprehended.

The notorious armed robber who has caused quite a scare has been finally apprehended by residents. The robber was said to have been caught while he was operating.

"This same guy has robbed over 40 homes in the area. He normally carries a pump action and has a dark male accomplice who escaped. Some witnesses in the neighbourhood reported seeing a dark short male running at about 4:30am in the morning in the same area Ugochukwu was caught,
"He was caught with his Toyota Camry with the car filled wit his victims valuables. His family members are trying so hard to get him released. Please spread the news. Over 50 people have identified him, he has r*ped many women in the area some were r*ped in front of their husbands at gun point. 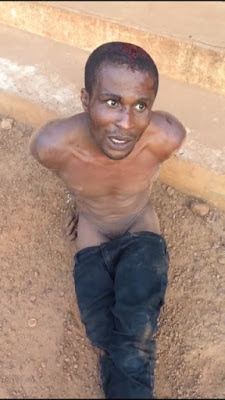