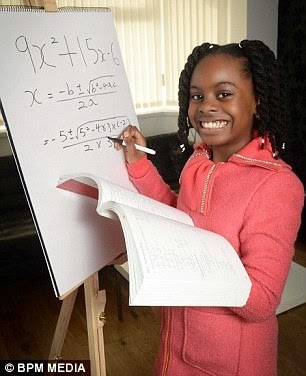 She spends her spare time in a similar way to many other ten-year-old girls - playing with Barbie dolls and making loom bands.But the key difference between Esther Okade and other children her age is that she has been accepted to study for a university maths degree - despite not going to school.

Esther, from Walsall, West Midlands, has enrolled on an Open University course months after she passed her A-levels - and wants to study for a PhD before running her own bank. 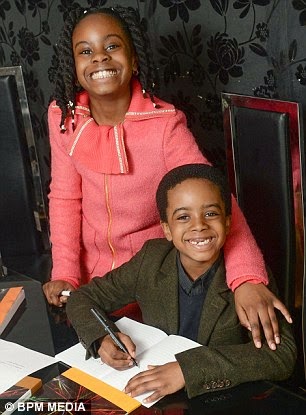 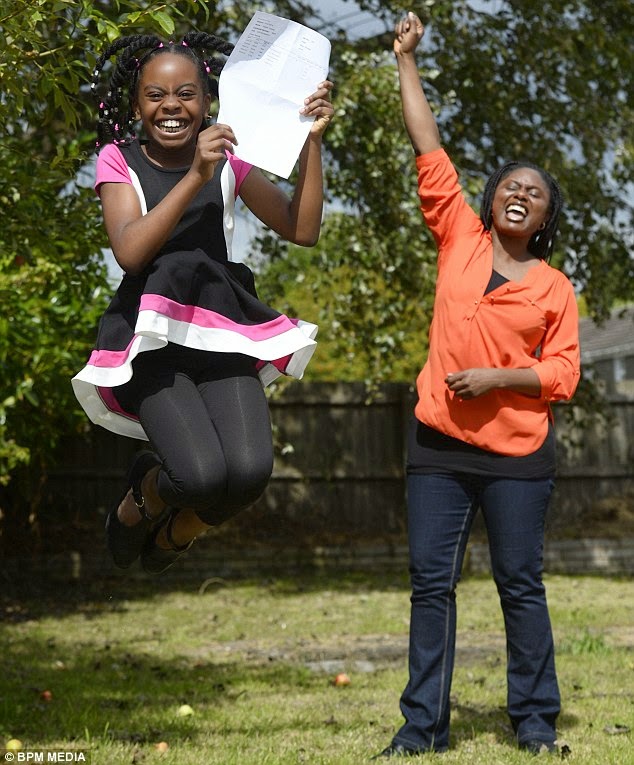 The girl, who gained a C grade in her maths GCSE aged six, has joined the course which started this month. Her younger brother Isiah is already studying for his A-levels - also aged six.

The siblings are both home-schooled by their mother Omonefe, who has converted the living room of their semi-detached, three-bedroom house into a makeshift classroom.

Mathematician Mrs Okade, 37, said: ‘Esther is doing so well. She took a test recently and scored 100 per cent. Applying to the university was an interesting process because of her age.

‘We even had to talk to the vice-chancellor. After they interviewed her they realised that this has been her idea from the beginning. From the age of seven Esther has wanted to go to university.

‘But I was afraid it was too soon. She would say, “Mum, when am I starting?”, and go on and on and on. Finally, after three years she told me, “Mum, I think it is about time I started university now”.’

Mrs Okade added that Esther - who will study for her degree at home - was ‘flying’ and ‘so happy’ when she was accepted by the university, and wants to be a millionaire.

She said: ‘For now we want her to enjoy her childhood as well as her maths. By the time she was four I had taught her the alphabet, her numbers, and how to add, subtract, multiply and division.

‘I saw that she loved patterns so developed a way of using that to teach her new things. I thought I would try her with algebra, and she loved it more than anything.’

Esther stunned her parents last year when she achieved a B grade in her pure maths A-level.
She applied to the Open University last August - and after a phone interview, an essay and an exam, she was told in December that she had been accepted onto the course.

Her father Paul, 42, a managing director, added: ‘I cannot tell you how happy and proud I am as a father. The desire of every parent is to see their children exceed them, and take the family name to great heights, and my children have done just that.’
Culled from Mail Online
[ads4]
Betting Tips on Whatsapp News Updates
Subscribe to Youtube
Related forums