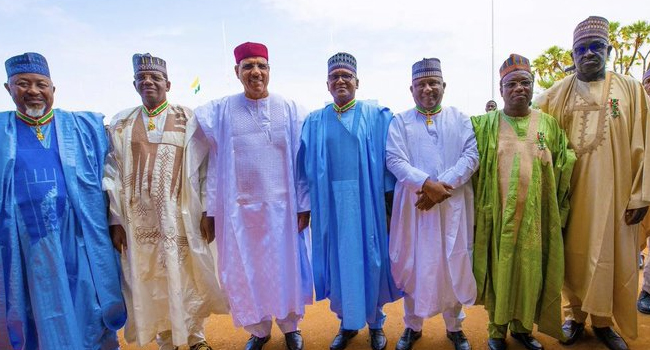 The Nigerien government has conferred national honours on six Nigerians including the President of the Dangote Group, Aliko Dangote, and two governors.

“To mark the Independence Day commemorated on August 3, the Republic of Niger Wednesday honoured six Nigerians-two Presidential aides, two businessmen, and two state governors with their national honours in recognition of their roles in the promotion of better relations between the two sister states,” presidential spokesman, Garba Shehu tweeted on Thursday morning.

Aside from Dangote, Governors Badaru Abubakar of Jigawa and Mohammed Bello Matawalle of Zamfara State were also honoured. Others are the Senior Special Assistant (Household and Domestic Affairs) to the President, Sarki Abba; the State Chief of Protocol, Ambassador Lawal Kazaure and the President of BUA Group, Abdulsamad Rabi’u.

They were conferred with the Order of Merit of Niger, Great Master of National Awards.

“The day is set aside to mark the nation’s independence from France in 1960 and since 1975 has been recognised as ‘tree planting day’ as trees are planted across the nation to aid the fight against desertification,” Garba added.

He quoted the Nigerien president, Mohammed Bazoum, as saying that his country cherished Nigeria as one of its closest neighbours and friends.

President Bazoum lauded the efforts of “brother Nigerians” for their strides in strengthening understanding between the two nations and also for acting as agents of social and economic development.

The Chairman of the Progressive Governors’ Forum (PGF) and Governor of Kebbi State, Abubakar Bagudu, was among the dignitaries that graced the occasion.

Tayo Christian – Beyond the Sound

Victory Sabbath – I Worship You

Too Late To Marry (2022 Nollywood Movie)

What We Do in the Shadows