I Have Slept With 5000 Men, Nairobi's Oldest Prostitute Who Never Misses Church Reveals 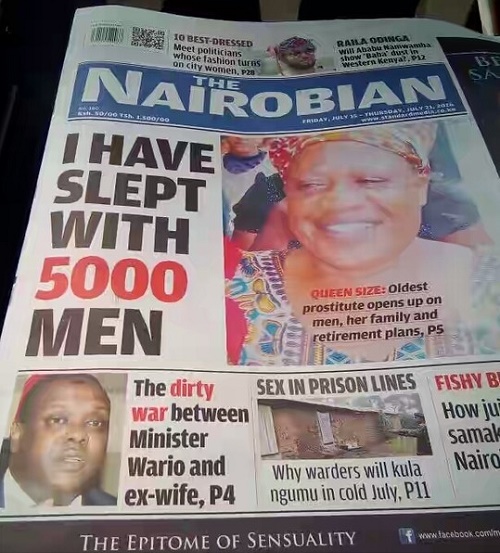 At 64, Rosemary Johns is still counting the number of men she has slept with to make ends meet and raise her children.

"I got married at 16, but after some time in marriage, my husband started neglecting us after I gave birth to five children," recalls the now mother of eight (two have since died and the rest are adults in Tanzania). "I could have had 10 children were it not for two miscarriages," reveals Rosemary who parted ways with her husband and became a barmaid in Musoma, Tanzania, before relocating to Nairobi where "I joined some women along Digo Road where we would wait for clients day and night and charged Sh5 for our services."

The price remained the same for more than five years "until it rose to Sh50 and finally over Sh100 in early 2000s, depending on the location," explains Rosemary who estimates that she could handle up to 40 men "on a good day" and "between five and 10 men on a bad day."

Rosemary, a staunch baptised Christian who never misses church on Sunday, is considering retirement because "nowadays we depend on long-term customers. In fact, I had started small leso business after getting Sh70,000 loan from a local bank, but fire razed down my house and shop in March. Even my baptismal card and other documents were burnt. That and other problems pushed me back to the business."

She reveals that, "Sleeping with more than 10 men for Sh50 each was a windfall because making Sh500 in a day was the equivalent of earning about Sh5000 today."

She adds that, "It has been a long journey and I've slept with more than 5,000 men in more than 20 years. I've been in the field, even my children know it, and used to visit but when they grew up and started their families, they stopped frequenting Nairobi."
Betting Tips on Whatsapp News Updates
Subscribe to Youtube
Related forums

APC Reveals How They Would Win 2022 Elections

Atiku Reveals The Kind of Leader Nigerians Should Elect In 2023