You won't believe what caused this plane to divert

A Singapore Airlines flight from Australia to Kuala Lumpur was diverted when fire detection devices were triggered by gas from the plane's cargo -- 2,186 sheep. The Boeing 747-400 freighter, which departed Sydney with a crew of four people and a cargo of 2,186 sheep, was diverted to Indonesia's Bali Denpasar airport about 45 minutes after the crew noticed fire detection devices in the cargo bay were reporting signs of smoke.

The plane landed safely in Bali, where the smoke indication was found to have been caused by manure and exhaust gases -- farts -- from the flock of sheep, the Aviation Herald reported. 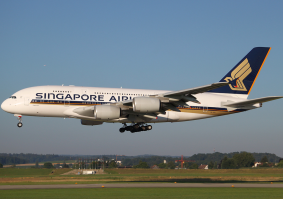 The flight returned to the air about 2 1/2 hours after the landing and continued on its way to Kuala Lumpur. Experts said stressful situations can cause sheep to become bloated with gas

'You Have a Right to Stand For What You Believe In' - Filmmaker, Ernest Obi Reacts to Chiwetalu Agu's Arrest by Soldiers For Wearing Biafran Attire

UPDATE! Facebook Admits Its Engineers Made A Mistake That Caused $100m Seven-hour Outage And Not Hackers