Yesterday's Bank Robbery Attacks Were Led By A Woman - Eyewitnesses

People who witnessed thedare devilrobbery at 2 banks at Ikorodu yesterday said the incident was led by a lady. A bank official, who narrated how the robbery took place, said the ecstasy displayed by the robbers was only comparable to “what you see when a footballer scores a decisive goal.”


As some of the gang members held everyone in bank hostage while looting additional cash from the strong room, others were doing the same at the First Bank branch in the area. 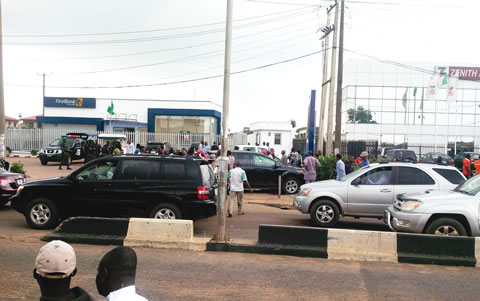 Satisfied with their bounty, the gunmen stormed out and challenged policemen, whose station is opposite the First Bank branch, to confront them.
Even though no policeman was in sight, they displayed more bravado by setting three Sports Utility Vehicles which they drove to the banks, on fire. Before this, they had removed the number plates of the vehicles.

A young lady was said to have led the over one hour attacks which bore semblance of the March 12 robbery in Lekki, Lagos.


Four persons, including a teenage apprentice vulcaniser, simply identified as Rilwan, were injured by the robbers who fled through a jetty in the area.


It was learnt that the bandits, numbering about 16 invaded the banks, located directly opposite the Ipakodo Police Division, at about 9am and started shooting indiscriminately.


They were said to have opened fire at the police station to scare the officers, after which they proceeded with their operation.


It was also learnt that the robbers used dynamite to shatter the rotor doors of the two banks to gain entrance and order members of staff and their customers to lie down.


It was gathered that some of the gunmen were outside the banks firing into the air for over an hour.


Some security operatives, comprising policemen and soldiers, arrived the area around 1.30pm after the robbers had fled. 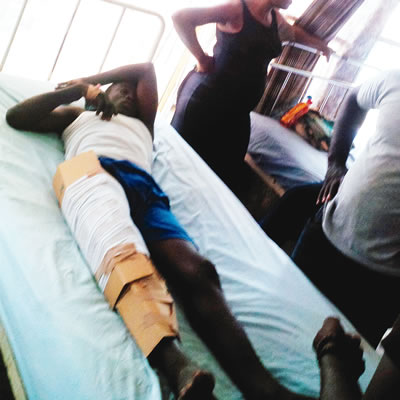 Punch correspondent, who visited the Ikorodu General Hospital, where the injured victims were taken to, met an employee of the Zenith Bank and a customer,who gave his name simply as Segun.

The banker (name withheld) and Segun sustained injuries after hitting their heads on glasses while the teenage vulcaniser and the fourth victim, an okada (motorcycle) rider, were hit by stray bullets.


The bank official narrated the incident to sympathisers and our correspondent who found his way into the hospital.
[ads4] 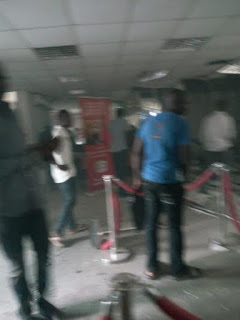 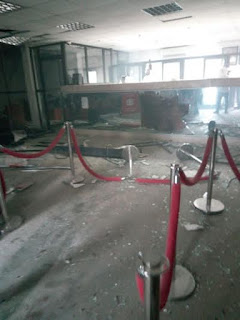 He said the robbers carted away over N80m from Zenith Bank which “a bullion van was to transport out of the bank.”


The banker said:
“They shouted, ‘open the door, open the door’, but none of usansweredthem. Suddenly, we heard an explosion and the glass went down. I was wounded by broken glasses.


“One of them entered and when he saw about N20m that we had arranged to put inside our ATMs, he shouted, ‘Area, Zico see money. See money wey we deylookfor.’He starteddancing. He pulled a lady among us and ordered her to pack the money inside the bags they brought.
After packing the money, the robbers ordered her to lead them to the strong room.


“When the lady opened the strong room, the robber that shouted in the ATM room exclaimed again, ‘Eheeeee, Area, Zico give me bags! Give me bags. Come and see money wey we dey look for. They packed everything in the strong room; more than N60m. We were expecting a bullion van to move the money before the incident happened.” 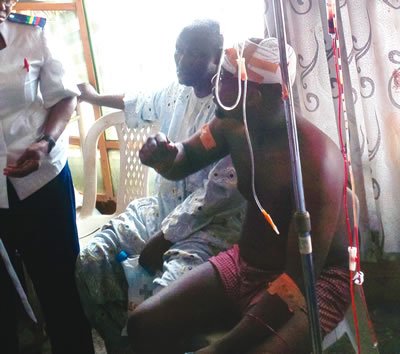 Segun, said,
“I was at the ATM section of the Zenith Bank to withdraw money. Suddenly, there were gunshots. Two of the gunmen came in and one of them threw me on the floor. He wanted to shoot, but his colleague told him to leave me.”

Ikechukwu Oyenso, who witnessed the incident said,
“I was at the First Bank at exactly 9am to use the ATM. It was my turn when we suddenly heard gunshots. I saw two of the robbers shooting directly at the police station and the policemen ran away.


“Some gunmen came into the First Bank. A guy stood outside and two entered the bank.


“They used dynamite to destroy the door of the bank. They entered the banking hall and ordered everybody to lie down. These guys looked young.
They were dressed in black and theyworecaps. They did not use masks. They robbed for over an hour. It was terrible.”


Another eyewitness, Ademola Fashola, who said he hid somewhere around the jetty area while the robbers escaped narrated this: 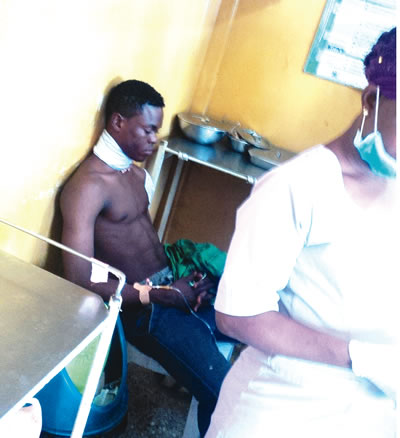 “I came to withdraw money from the First Bank ATM, but I changed my mind and headed for Ipakodo, near the jetty. I was there when I heard the gunshots. After they had robbed the banks, the gang leader, a woman,walkedwhile their cars moved towards theOriginGardens (the jetty area). She dared the police to come out and ordered her gang members not to shoot anybody. She is not up to 20 years. I saw five of them. They dragged the bags that contained the money inside the jetty. I heard one of them calling somebody to pick them. He was shouting ‘Taofeeq, Taofeek, come and pick us now’.”

An eye witness that went by the name Saheed said,

“Where I hid, I saw them carrying bags of money into the jetty. That short woman held the gun, while another guy took the money inside the jetty. When they were about to escape, they removed the number plates of their three cars, poured fuel on them and shot at one of them, which erupted in flames.


“Along that waterfront are naval officers. Where were they then?”

Is She Your New Girlfriend? - Fans Question Whitemoney After Getting Romantic With Woman (Video)

Osun 2022: Singer Davido Attacks His Cousin For Planning To Contest Against His Uncle

Women of the Movement