My name is Bolanle Niyi.?????????? I have attended the Holy Ghost Congress with Daddy G.O. of RCCG, Pastor Adeboye for several years now and would say that I have always left uplifted and encouraged in my faith in God and country. It was a great shock, therefore, when I read the newspapers sold exclusively during this year’s congress titled, FLOODGATES OF HEAVEN which included blatant lies about another man I also love and respect, Prophet T.B. Joshua.

There were different evangelical items being sold in the camp like stickers, wristbands, handkerchiefs, anointing oil, Daddy GO’s pictures, books and audio tapes to name a few. I bought a Christian newspaper titled “THE SHEPHERD” Vol 12 No 13 from an accredited vendor in the Redeemed camp, which had a headline story: PRAY FOR BUHARI NOT TO DIE IN POWER – T.B. JOSHUA WARNS. The article claims T.B. Joshua prophesied the death of Buhari in office, stating that he was not Nigeria’s messiah. The article added that T.B. Joshua predicted that Vice President Yemi Osinbajo would take over and later be assassinated by an ex-military Head of State. 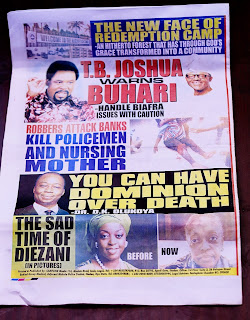 Another article in the paper stated that Prophet T.B. Joshua recently held a crusade in Kaduna and addressed journalists at the airport concerning what God showed him about President Buhari. To make matters worse, another publication I had bought, titled “CHURCHMIND”, had an equally falsified story, titled “TB JOSHUA WARNS BUHARI – HANDLE BIAFRA ISSUES WITH CAUTION”. It claimed that the Prophet pleaded with Buhari to personally intervene in the Biafra issue. 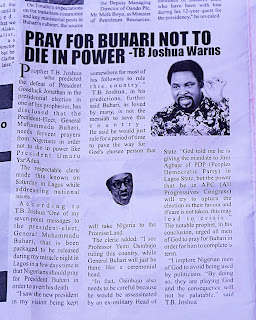 These papers were sold inside the camp where government officials were present, such as Vice President Osinbajo, Lagos State Governor Ambode and Ondo State Governor Mimiko. For those who don't believe me, I took pictures of the publications and have attached them.

I am SHOCKED that Redeemed Christian Church Of God could be used to sell such lies. As an avid viewer of Emmanuel TV, I know for a fact that T.B. Joshua NEVER said such. I mean, he has not been seen in his own church since before his crusade in Mexico in May and has not been seen in public since his visit to the President of Tanzania in October of this year. He certainly has not held any crusade in Kaduna or any other state in Nigeria for that matter and has never spoken publicly about Biafra. I know that all prophecies given by Prophet T.B. Joshua are shown on Emmanuel TV.

Since I left the congress, I have been asking myself what could possibly be the motive for writing, publishing and releasing such fabrications? Out of concern, I checked the major newspaper stands in Lagos and could not find these newspapers anywhere else. I went to Ojuelegba, Oshodi and Ikeja – nothing. Does this mean they were prepared solely for the Congress? I can only conclude that they willingly did this to try to stir up a crisis between TBJ and Buhari.

For how long will Nigerian pastors endorse division and spread falsehoods about fellow ministers of God? What kind of religion is this? Jesus is the Truth and commands us to speak truth to our neighbours. I am highly disappointed that such a respectable figure in Nigerian Christian society, Daddy G.O. can lower his standards to such a degree to allow this. Imagine what an impact we would have on the kingdom of darkness if we were one and dropped all of this jealousy, envy and resentment. Unfortunately, the Congress has left me more confused than before I attended.
By Bolanle Niyi