Pictures show Chisco Luxury buses allegedly burnt down by political thugs in Lagos on February 12th. Didn't even know this happened until president Jonathan said it in a recent interview;

"I was surprised last night when the owner of Chisco, the company that runs transport business between Lagos and the South East told me that 18 of his luxury buses were burnt down in Lagos by youths of a rival party because my billboard was close to his facility. Is that the kind of people that want to take over the running of this country? Is this country going to be managed by people with that kind of background" he said 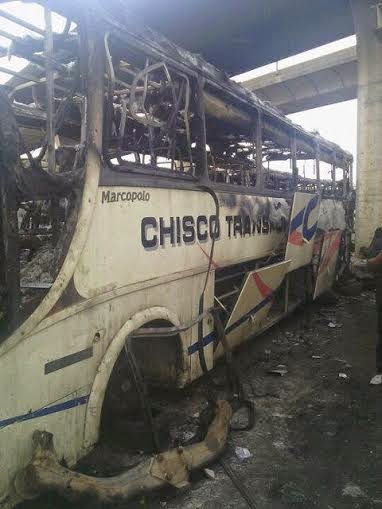 [ads4]
The fire was said to have started after some hoodlums took advantage of a political campaign rally to throw substances suspected to be explosives into the premises of the transport company in apparent protest against President Jonathan’s poster on a building beside Chisco’s head office.
A witness who identified himself as Stanley told Sun News last week;
"It was when the All Progressives Congress (APC) campaign train was passing during their political rally along Eko Bridge that some hoodlums supporting the party, took advantage of the rally to throw objects into the premises of the company when they saw President Jonathan’s billboard hung on the uncompleted building beside Chisco Head Office, thinking the premises belongs to the Federal Government.”The building belongs to the Industrial Training Fund (ITF), a Federal Government parastatal sharing a common fence with the leading transport company.
Betting Tips on Whatsapp News Updates
Subscribe to Youtube
Related forums