Medical staff put on protective gear in a government hospital in Kenema before taking a sample from a suspected Ebola patient. Ebola has killed more than 600 people across Guinea, Liberia and Sierra Leone since an outbreak began in February. (Tommy Trenchard/Reuters) 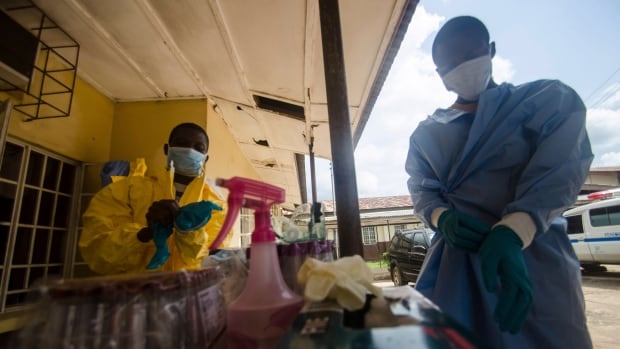 A Liberian man who died in Nigeria's megacity of Lagos on Friday has tested positive for the deadly Ebola virus, the country's health minister has confirmed.

The man, who was in his 40s, collapsed on arrival in Lagos, a city of 21 million people, on Sunday, and was taken from the airport and put in isolation in a local hospital.

Nigerian Health Minister Onyebuchi Chukwu said all ports of entry in the country are now on "red alert" and health officials are investigating all people who had contact with the deceased.?

Earlier on Friday, a Nigerian official in Geneva said the man died while under quarantine.

Ebola, one of the world's deadliest diseases, has killed 660 people across Guinea, Liberia and Sierra Leone since it was first diagnosed in February. There have been 1,093 cases to date in West Africa's first outbreak, according to the UN health agency.

The Liberian man is the first case on record of Ebola in Nigeria, Africa's biggest economy and, with 170 million people, its most populous country.

"He departed on the plane initially with no symptoms, he reported being symptomatic on arrival. I understand that he was vomiting and he then turned himself over basically, he made it known that he wasn't feeling well. Nigerian health authorities took him and put him in isolation," World Health Organization spokesman Paul Garwood said earlier on Friday.

Ebola victim from Sierra Leone on the run

Also on Friday, Sierra Leone officials appealed for help to trace the first known resident in the capital with Ebola whose family forcibly removed her from a Freetown hospital after testing positive for the deadly disease.

Radio stations in Freetown, a city of around 1 million inhabitants, broadcast the appeal on Friday to locate the woman.

"Saudatu Koroma of 25 Old Railway Line, Brima Lane, Wellington," the announcement said. "She is a positive case and her being out there is a risk to all. We need the public to help us locate her."

Koroma, 32, a resident of the densely populated Wellington neighbourhood, had been admitted to an isolation ward while blood samples were tested for the virus, said health ministry spokesman Sidi Yahya Tunis. The results came back on Thursday.

"The family of the patient stormed the hospital and forcefully removed her and took her away," Tunis said. "We are searching for her."

Fighting one of the world's deadliest diseases is straining the region's weak health systems, while a lack of information and suspicion of medical staff has led many to shun treatment.

Dozens with Ebola unaccounted for

Earlier this year, a man in Freetown tested positive for Ebola although he is believed to have caught it elsewhere.

According to health ministry data and officials, dozens of people confirmed by laboratory tests to have Ebola are now unaccounted for in Sierra Leone, where the majority of cases have been recorded in the country's east.

While international medical organizations have deployed experts to the field in an attempt to contain the outbreak, WHO said poor health infrastructure and a lack of manpower were hindering their efforts.

"We're seeing many of these facilities simply don't have enough people to provide the constant level of care needed," Garwood told a news briefing in Geneva on Friday.

There is no cure or vaccine for Ebola, which causes diarrhea, vomiting and internal and external bleeding. It can kill up to 90 per cent of those infected, although the mortality rate of the current outbreak is around 60 per cent.

The West African outbreak is the first time that Ebola, which was first discovered in what is now Democratic Republic of Congo in 1976, has appeared in heavily populated urban areas and international travel hubs.

Cases have already been confirmed in Conakry and Monrovia, the capital cities of Guinea and Liberia.
Betting Tips on Whatsapp News Updates
Subscribe to Youtube
Related forums

"Don't Be Desperate To Leave The Country, You Can Make It In Nigeria – Tonto Dikeh