West African nations neighbouring those hit by the Ebola epidemic — Mali, Ivory Coast, Senegal and Guinea Bissau — should prepare for the possible arrival of travellers carrying the deadly virus, the World Health Organization said on Friday.

The outbreak persists especially in forested areas of Guinea, Sierra Leone and Liberia, and its spread is being fuelled by unsafe burial practices that infect relatives handling bodies, the U.N. agency said. 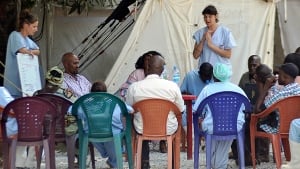 Health workers speak to relatives of people infected with Ebola at an isolation center at Donka Hospital in Guinea's capital, Conakry, in April. Some of the sick have travelled to get medical treatment, spreading the disease to big cities. (Cellou Binani/AFP/Getty)

The outbreak persists especially in forested areas of Guinea, Sierra Leone and Liberia, and its spread is being fuelled by unsafe burial practices that infect relatives handling bodies, the U.N. agency said.

"We want other countries in West Africa to be ready — bordering countries, Ivory Coast, Mali, Senegal, Guinea Bissau — to prepare themselves in case people affected with the disease may be also travelling," WHO medical officer Dr. Pierre Formenty told a briefing in Geneva.

Despite efforts by national health authorities and international aid organizations to contain its spread, the WHO has recorded 635 infections, including 399 deaths, in Guinea, Sierra Leone and Liberia since the outbreak began in February.

Some of the sick have travelled to get medical treatment, spreading the disease to big cities such as the Guinea capital of Conakry and Liberian capital of Monrovia, Formenty said.

"Roads exist in all of West Africa. There are roads going to Bamako, going to Abidjan, going to Dakar," he said.

Ebola causes vomiting and diarrhea, impairs kidney and liver function and may cause internal and external bleeding.

It kills up to 90 per cent of those infected. It is spread by close contact with the blood, body fluids and tissues of infected people or high-risk animals such as monkeys. The incubation period is from 2 to 21 days and there is no treatment or vaccine.

The epidemic is already the deadliest since Ebola first emerged in central Africa in 1976, and the number of infections continues to rise.

The medical charity Medecins Sans Frontieres (MSF) or Doctors without Borders said on Monday that the epidemic is out of control and requires massive resources from governments and aid agencies to halt its spread.

Health workers have been able to control outbreaks in some places but it was proving more difficult in some other sites, partly due to the difficulty of convincing families about the required changes in behaviour.

"We are not there yet, we shall continue our effort. Because for me the only way we will succeed is when the people will understand clearly how dangerous it is for their life to conduct unsafe burial [practices] during an outbreak of Ebola," he said.

But he added: "This is not out of hand."

Sierra Leone's health ministry warned Friday that it is a serious crime to shelter someone infected with the Ebola virus.

The health ministry statement also lamented the fact that a number of patients had discharged themselves from hospital in Kenema district, where the outbreak is taking place, and gone into hiding.

The statement said that those interfering with the health teams would be punished.

In remote parts of Sierra Leone, in some cases villagers believe the drugs used to treat the disease were causing the illness.

The worst outbreak of the deadly Ebola virus, which has no known cure, is currently taking place in Guinea, Sierra Leone and Liberia.

There are 176 cases in Sierra Leone with 46 fatalities.

He said the UN health agency is not considering recommending travel or trade restrictions on the three countries, calling them "drastic measures".

"We favour much more the dialogue with the affected family, the affected village and the affected district, than really trying to be a sort of sanitary police who would try to control any movement of the population."

WHO's Regional Director for Africa Luis Sambo on Thursday called for drastic action to halt what he said has turned into a cross-border crisis.

West African health ministers are due to meet in Accra, Ghana on July 2 and 3 to try to coordinate a regional response.