American rapper and proud mother of one, Cardi B, who channeled Poison Ivy for this year's Halloween, shared this racy photo her husband Offset took of her as she flaunted her bare bum in her costume.

She captioned the photo: 'Pic taken by daddy @offsetyrn.' 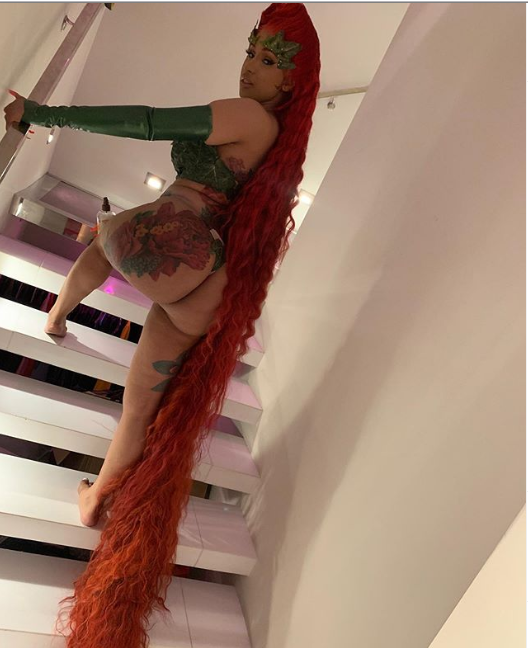 Forum
No fewer than 10 people lost their lives in fatal road accidents in Ogun and Anambra states on Monday. Six persons, including an infant, a five-year-old boy and a grandmother died in two separate crashes in Ogun, with 14 people injured. The first crash, which occurred on Ishara Bridge on the Lagos-Ibadan Expressway, led to the death of four persons. The accident, which involved a Mazda with number plate, XC 330 WWD, occurred around 2.20pm. The second crash, which happened at Sagamu, claimed two lives and involved a Toyota Camry with number plate, LSD 797 GJ. The Public Relations Officer of the Ogun State Traffic Compliance and Enforcement Corps, Babatunde Akinbiyi, confirmed the two incidents. He said in the first accident, the four deceased passengers were a five-year-old boy, two male adults and one female adult. He explained that the crash happened after one of the tyres of their vehicle burst. “We learnt that the commercial bus, loaded with 16 passengers, including the driver, was on transit from Lagos to Ibadan, when the rear tyre burst due to speeding. “The four corpses were deposited at FOS Mortuary, Ipara-Remo, while the injured were admitted to Idera Hospital and Victory Hospital, Ibara Remo. “The vehicle was taken to Ishara Motor Traffic Division, Remo,” Akinbiyi added. He noted that the second accident was caused by reckless driving, adding that two pedestrians – a woman and her granddaughter – were killed. “According to an eyewitness, the Camry car was on top speed when it suddenly lost control, somersaulted and hit the aged mother and her granddaughter, who were in front of their house, which was by the roadside. “The aged woman and her granddaughter died on the spot, while the occupants of the vehicle, four of them, including the driver, were nowhere to be found. “Though they were reported to have been hospitalised at Idera Hospital, our post-crash investigation confirmed that they were not there,” Akinbiyi said.
14 hours ago

Forum
#BBNaija star, Mercy Eke flaunts her curves in new sexy photos ahead of her 27th birthday
22 hours ago

Chow Mane – From The Soil
16 hours ago