The Wyckoff Accumulation: Why Is Bitcoin at a Critical Level According to the Model?

Bitcoin’s price performance lately has followed the Wyckoff Accumulation Schematic, with investors speculating on what’s coming next, according to the popular model.

The Wyckoff Accumulation Schematic created by Richard D. Wyckoff has become a widely discussed and controversial topic among crypto traders lately due to Bitcoin’s positioning. With that in mind, it’s worth exploring this key feature, what it means for the asset and how it could impact its future developments.

What is the Wyckoff Accumulation?

The Wyckoff Accumulation forms when a particular asset, in our case Bitcoin, enters a period of consolidation with multiple drawdowns in a trading range.

This is intended by larger players to “shake out” weak hands in the market and, at the same time, create an opportunity to accumulate considerable positions while the price is low.  Trading volume usually decreases as price consolidates. This indicates that supply is being exhausted, which weakens selling pressure.

Once the consolidation completes, the larger traders determine that the supply has been exhausted. At this point, the price will be ready to go up, leading to a breakout to the upside.

The Wyckoff Accumulation consists of multiple phases and, as mentioned above, is heavily influenced by Supply/Demand, Buying Test Requirements, and Effort/Result Principles. Supply/Demand is simply the balance between buyers and sellers. 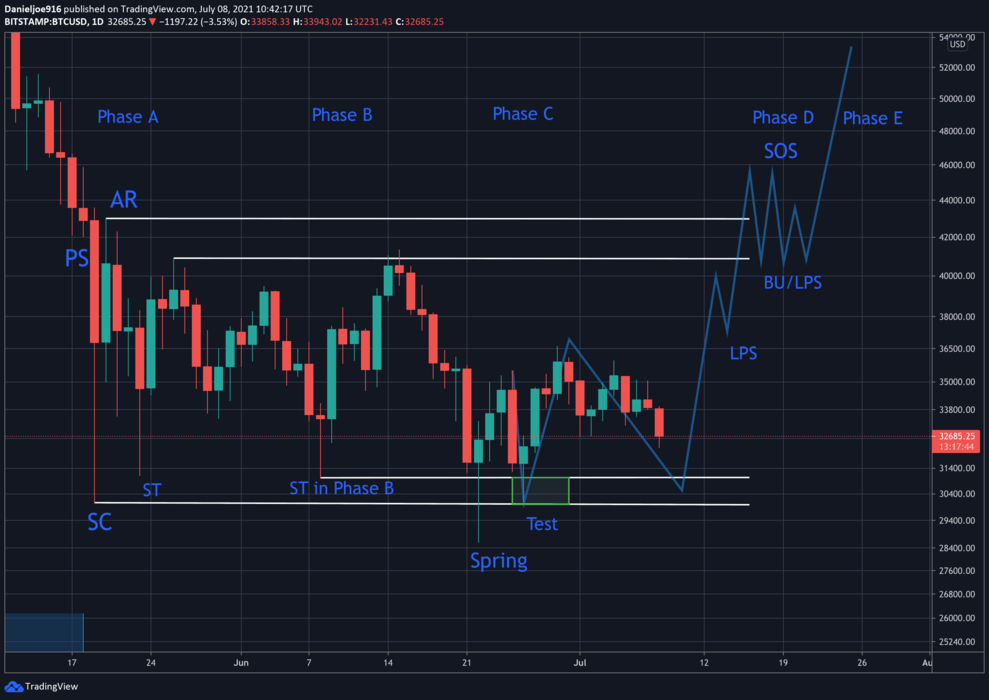 When there is higher Supply than Demand, prices drop, and vice-versa. Buying Test Requirements – these are the specific parts of each phase aiming to “test” the market for supply. Effort/Result measures the severity of reactions in price movement and volume.

The first phase is a significant leg down, followed by a high trading volume. This shows that both Effort (volume) and Result (price) are in harmony.

The steep sell-off means that at the moment, the supply was much higher than the demand. As we know, this was the massive Long Liquidation as exchanges flushed out over-leveraged positions. 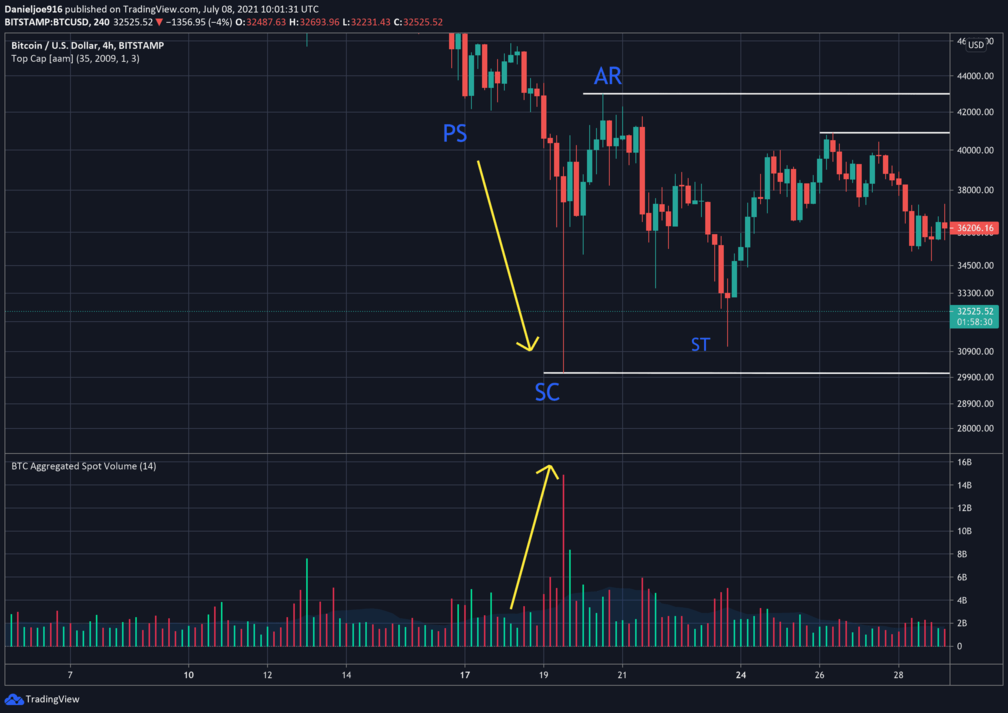 After the first leg down, the price transitions to an Automatic Rally, which is a temporary reversal due to an extreme supply and demand imbalance.

The next part of Phase A is the Secondary Test. This is where the price falls again, but with significantly less volume than during the Selling Climax. In this case, it took less Effort (volume) for a lower Result (price). This is an early indication of supply exhaustion in the market. 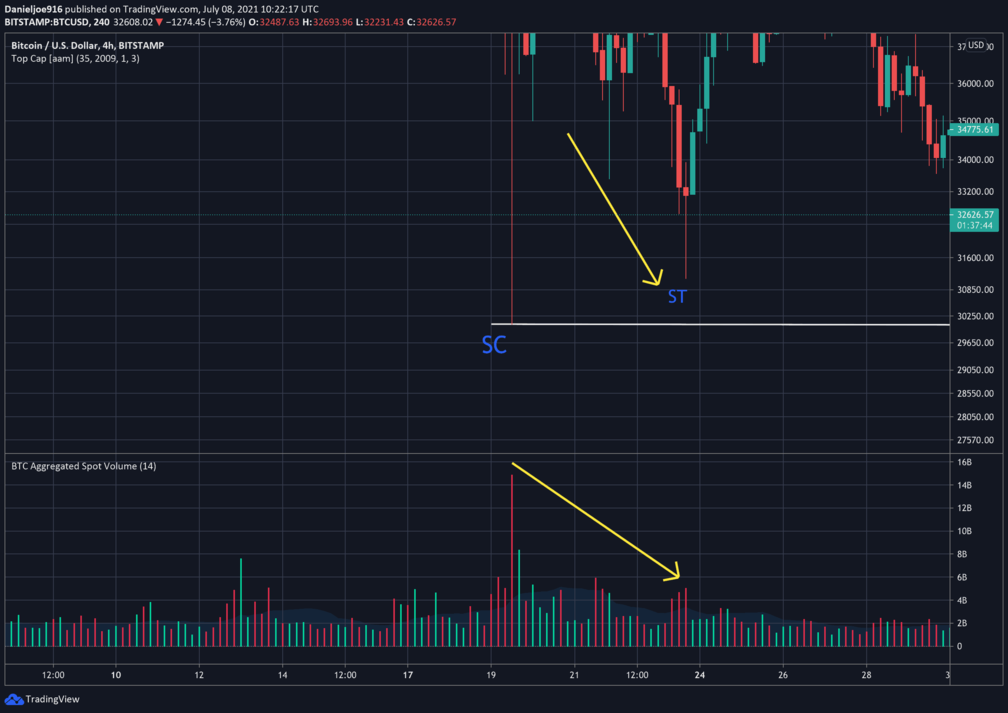 Phase B – the Secondary Test

On Phase B, the price continues to consolidate with a pullback. This is where larger players test the market for supply.

In the chart below, BTC’s price fell to as low as 31,000, but with less volume than the previous nosedives, which is a positive signal and can indicate early signs of supply exhaustion. The price then rallies back up to continue the trading range. 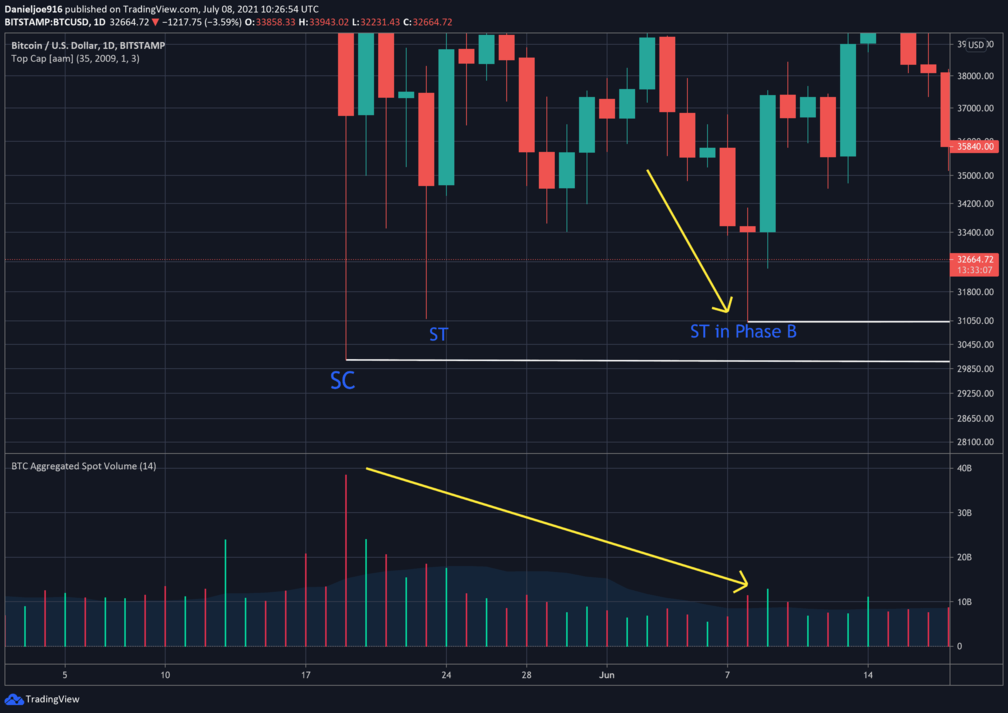 This phase is where larger players intentionally sell to sharply drive down the price, pushing weak hands to act in panic and dispose of their assets at low prices.

Usually, the traders will briefly drive prices below the trading range and send them back up as they start buying substantial supply amounts.

During the Spring, the price falls, but not as much as the Selling Climax (phase A). More importantly, volume spikes, showing that large players are heavily accumulating and absorbing supply. 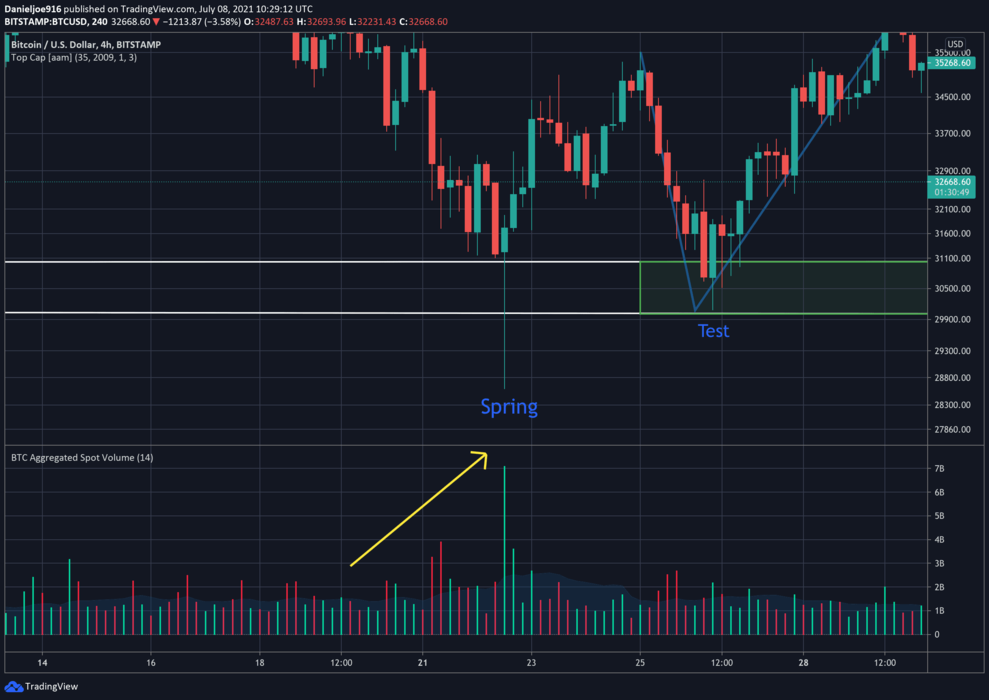 The Test comes after the Spring, where large players ‘test’ the market for supply. Price is then pushed down to the lower part of the trading range to gauge supply on the market. If the price drops with less volume and support holds – this can be seen as a positive signal of further supply exhaustion. 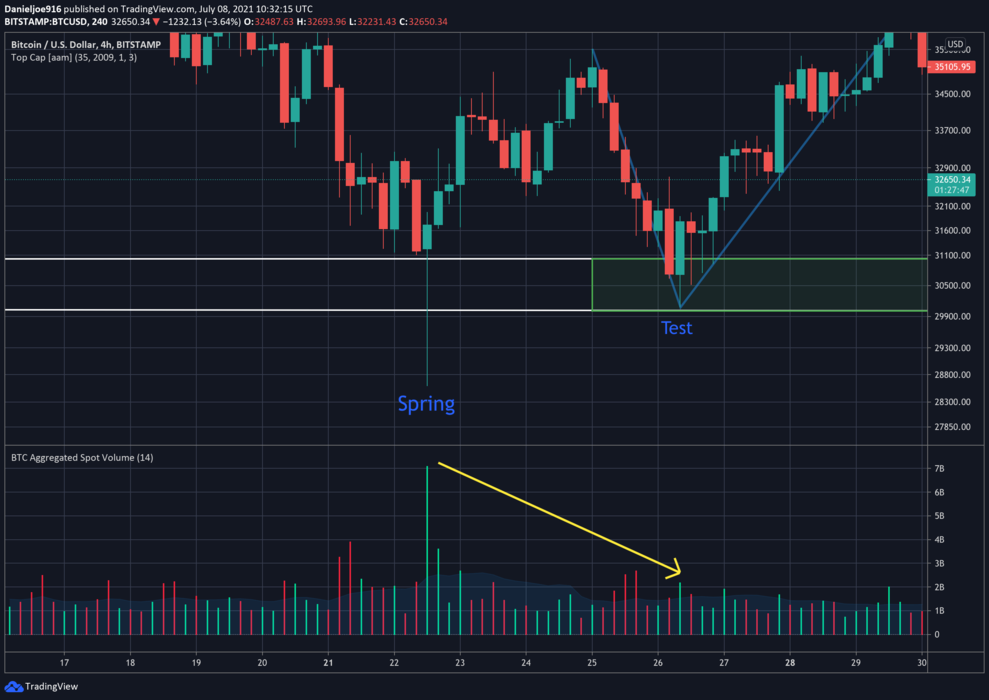 Regarding Bitcoin, it formed the Test at a low of $30,100 (June 26th), followed by less volume than the Spring, and as can be seen below – held support and pushed higher.

After forming the Test at $30,100, BTC spiked further north to make a short-term Higher High at $36,600 (June 29th). The cryptocurrency then saw a short-term pullback and formed a Higher Low at $32,700 (July 1st-2nd).  This pullback was followed by less aggregated volume, signaling supply exhaustion.

At the time of writing, according to the definition of each Wyckoff Phase and Principles explained, BTC appears to be in the latter half of Phase C.

This is a critical point in BTC’s consolidation as the price must hold support at $30.1K, the low of the Test.

The next phases will be reached once the larger players have determined supply has been exhausted after a series of Tests.

The signal is declining volume throughout the trading range and particularly decreasing volume with each pullback. If BTC can push above $36,600, then the current structure will require BTC to rally up to $40,000 and then have a short-term pullback to form the Last Point of Support. After that, it will start another strong rally aiming at $43,000, consolidate, and then go significantly higher.

Risks and How this Structure can be Invalidated

There is no such thing as 100% certainty in the markets, and especially in on-chain analysis. In general, it comes down to probabilities.

If BTC makes a daily close below the near-term higher low at $32,700, the short-term downside risk will increase. The current Test at $30,100 from June 26th is the critical level to watch. 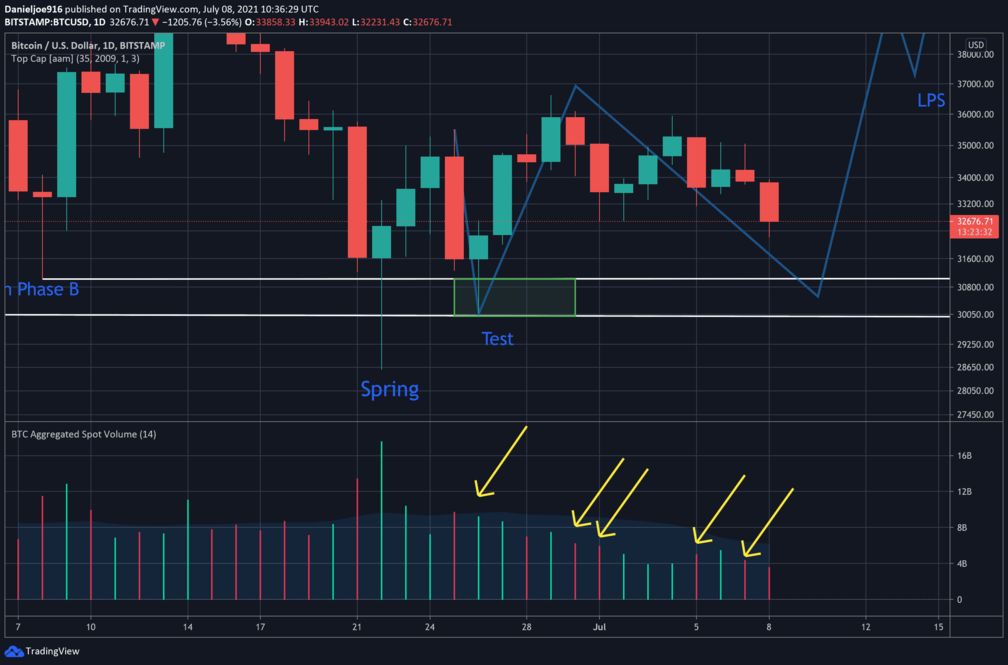 The technicals are showing bullish divergence on the daily chart, with momentum slowly trending higher. Key Moving Averages are flattening, with volume decreasing within each pullback.

On-chain analysis has also confirmed an uptick in BTC whale activity, with an increase of 60,000 BTC purchased in one day to start July. These are all positive signals for BTC.

BTC appears to be following the Wyckoff Accumulation Schematic and has shown precise price action for each phase by definition. If it holds $32,700 on the daily and pushes above $36,600 to form another Higher High, this will be a very bullish signal.

Binance Coin Analysis: Will BNB Bulls be Able to Defend This Critical Support?

Bitcoin OTC Deals On The Rise: $131 Billion Moved in a Day (Analyst)

Bitcoin Mining Will Be Fully Renewable by 2030, Says Anthony Scaramucci