Harrysong was for months shut out of his account, @iammrsongz by dare devil hackers after several attempts to defraud him proved abortive.

The singer’s twitter account was earlier in the year hacked and recovered a month after. Shortly after the account was restored, it was hacked again, hence the decision to abandon it completely for a new one becomes the sensible move.

Harrysong has launched a new twitter handle, @iamharrysong and wishes to inform his fans to connect with him via the new medium. 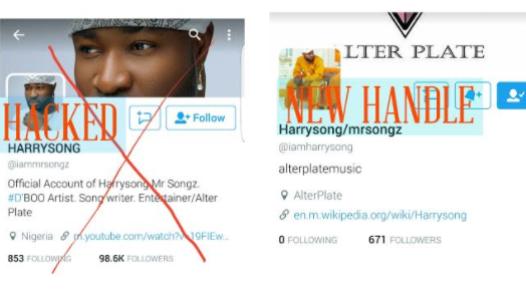 Iterating that all his other social media handles remain the same, Harrysong also seizes this opportunity to register his unreservedappreciation to his teaming fans for their undying love and standing by him even in the most challenging times.

“I and my Alterplate team shall be releasing some new materials pretty soon and I am convinced you’ll all love them. In the interim, my collaboration with D’Banj titled “It’s not a lie” is out, go check it out and feel free to share your thoughts with me via my social media handles