In cinema business various things contribute in making a movie a box office hit. It could be the popularity of the character in the movie, the quality of the script or direction, the special effect used, the reach of the marketing campaign, positive word of mouth or the timing and appropriateness of its release schedule.


In Nollywood only few actors are known to have made several movies a box office hit. The likes of Omoni Oboli in, ‘Anchor Baby’, ‘Being Mrs. Elliot’, ‘The First Lady’, ‘Wives on Strike’, and ‘Fifty’; Genevieve Nnaji in, ‘Mirror Boy’ and ‘Road to Yesterday’; Omotola Jolade in, ‘Ije’ and ‘Last Flight to Abuja’ and Funke Akindele in, ‘The Return of Jenifa’ and ‘Married but Living Single’.

The question now is can Adesua Etomi, Wale Ojo, Majid Michel, Bishop Umoh, Theresa Edem and other casts in what is said to be one of the most anticipated movies of 2016, ‘Ayamma’, make it a box office hit. Ayamma will be premiered at the Intercontinental Hotel, Victoria Island, Lagos on Tuesday, December 13, 2016 and released in cinemas on Friday, December 23, 2016. 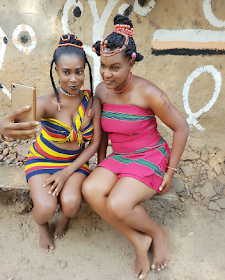 Ayamma which is a movie set in Akwa-Ibom produced by Emem Isong-Misodi, under the production of Royal Arts Academy, tells the story of Prince Daraima (Wole Ojo), the fascinating heir to Obong Ikpaisong, who repeatedly dreams of Ihuoma (Adesua Etomi), poor but radiating maiden whose beauty is matched only by her voice. He is in love with the girl of his dreams. In the real world, Prince Daraima is set to marry Princess Ama (Tinsel star, Theresa Edem), the arrogant child to a neighbouring Monarch. Princess Ama observes her groom-to-be captivated by Iko and resolves to nip this obvious threat in the bud.

Guys, what do you think?