The Ethiopian-Canadian singer whose real name is Abel Tesfaye used to have a drug habit after first smoking weed at the age of 11. Those junkie days are behind him now but he admits he occasionally turns to drugs when in need of inspiration while writing his songs. The 26-year-old Oscar nominee admitted he used marijuana, Hennessy, and 'a few more things' in the recording studio for his album, Starboy. 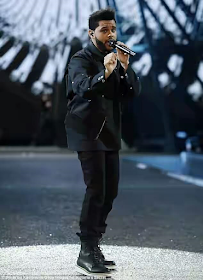 'The past couple of albums, I do get back to [using drugs as a crutch]. 'Even on this new album. You have writer's block. And sometimes you're like, "I can't do this sober." I had to get that little jump, and the ball started rolling. And then I didn't need it anymore.'
The Weeknd - stressing that he's now 'in control' - first smoked weed at age 11 before moving onto cocaine, MDMA, painkillers, Xanax, mushrooms, ketamine, and cough syrup back in his Toronto hometown. 'When I had nothing to do but make music, it was very heavy.'
'Drugs were a crutch for me. There were songs on my first record that were seven minutes long, rambling - whatever thoughts I was having when I was under the influence at the time. I can't see myself doing that now.'
The high school drop out sorted himself out and forged a successful career in music, he has gotten his mother, Samra a car and a house. He said:
'I couldn't ever go back home without being something. I probably would never have gone back home if...That was definitely a big motivation. To get back home, and not empty-handed.'
Betting Tips on Whatsapp News Updates
Subscribe to Youtube
Related forums

BBNaija: “I Am Not Scared , I’m Ready” – Jackie B Says Ahead Of Live Eviction

Insecurity: Peace Can Be Achieved By Tackling Poverty, Says Jonathan

Do You Agree?? Some Politicians Worse Than Bandits, Says Gumi