A lady, who goes by the name Ogbuji Grace Amarachi, has taken to Instagram to expose an upcoming comedian, Ominiaho, who she alleges is threatening to leak her l£sb!an sex tape.XX According to Grace, who seems to be an OAP with City FM, she says Ominoaho whom she actually met through the babe she did the sex tape with failed in an attempt to date her six years ago, and now the comedian has come out threatening to release the video online following series of failed appointment.Read her full post below… 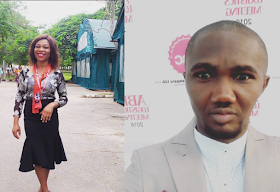 ‘We all have done foolish things one time or the other in our lives... Have actually done lot of foolish things, yeah lot of stupid things indeed... Way back 2010/2011, was yet to gain admission, done with secondary education, somehow I got myself entangled in a lesbo relationship not because I was a l£sb!an ,out of curiosity after reading and seeing pornographic videos/images of girls making out,I just had this deep urge to have a feel of what it's like.?
Well my foolish dream came true when somehow I actually got entangled in what I had always been curious to have. Just this once in my life,a video was made,well it felt good and seem sane to me then. Sometime in late August/mid-September this year@ominiaho whom I actually met through the babe who did the video, he did threatened to release the video online, way back 6years ago he did ask me out which I never did accepted and I never will,i simply wasn't interested. All of a sudden he popped up this year, calling, asking to see me,saying he's got a job for me and all that, asking to see me, fixed a date and all that which I didn't turn up to anyways, when he saw his plans to have me wasn't working he decided to threaten me with the video which happened like way back 6years ago. How he got the video I dont know? If he actually do have the video I don't know either!
I spoke to Drea who made the video today on my way back from church, just to clear the air even tho we haven't seen nor communicate in like years and she was shocked stating she doesn't have the video,she deleted it a long time ago and she's sure @ominiaho doesn't have the video,but still i'll drop this here.? Am I scared? YES! Did I make a mistake? YES,i did made a nasty mistake!! Have I moved on,YES I have!!!...I don't want to be another Chidinma Okeke,seeing chidinma okeke case I have no other choice but to voice out now. Am not going to lie or claim it was photoshopped, I did something stupid and am way over it and have moved on,but just incase one day something pops up, its all in the past!
Betting Tips on Whatsapp News Updates
Subscribe to Youtube
Related forums

OMG!! Kenyan Woman Strangles Her Children To Death After Disagreement With Her Husband