She won the award ahead of singer Wizkid and Nigerian blogger Linda Ikeji.

‘I will like to thank God for this precious talent, and my lovely wife. It’s been a fantastic year for me winning the Olympics.

‘The haters are still coming,’ Semanya said as she dropped the mic on stage.

Semenya was the gold medal winner in the 800-metre event at the 2016 Summer Olympics in Rio, Brazil. She has also been nominated for the women’s 2016 World Athlete of the Year by world athletics governing body, IAAF.

Other personalities nominated in the category include Gabon striker and 2015 African Player of the Year Pierre Emerick Aubameyang, and TV personality Pearl Thusi.

Following her victory at the 2009 World Championships, it was announced that she had been subjected to gender testing.[2] She was withdrawn from international competition until 6 July 2010 when the IAAF cleared her to return to competition. In 2010, the British magazine New Statesman included Semenya in a list of "50 People That Matter 2010".

In late 2015, Caster Semenya became married to longtime girlfriend Violet Ledile Raseboya. The two tied the knot in a traditional wedding ceremony in their home province of Limpopo. In an interview with the Sunday Times earlier this year, Semenya said, “I just got married a few months ago. With the support I get from my training partners, my wife, coach, fellow South Africans and the support system at the university, there’s no way you can’t be happy.” Semenya and Raseboya have known one another since they were teenagers, and while Semenya was in Rio, her wife was rooting her on Instagram. 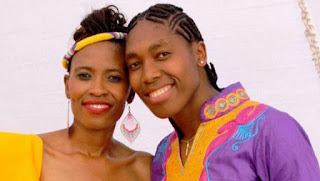 Wizkid VS Tems, Who Performed Better In 'Essence'