Nollywood actress, Chioma Grace Ifemeludike has called on Nigerians to air their grievances directly to the federal government and not wait for a celebrity.

This, she said in reaction to cries of boo and insults pelted on Naira Marley, a musician who cancelled his protest today.

Naira Marley was supposed to lead his followers ”Marlians” in a mass protest to end the Special Anti-Robbery Squad (SARS).

He however called it off after agreeing to have a LIVE chat with DCP Frank Mba of the Nigeria Police Force.

Ifemeludike wrote that she believes that a real protest would begin in the slums by the most frustrated and deprived Nigerians.

”Truth is no celebrity owes us a protest, as much as I agree they can use their influence and platforms but you can’t force anyone.

”The mass force movement will start from the slums by they most frustrated and deprived not people with dual citizenship… MALIANS PRESIDENT, I greet o 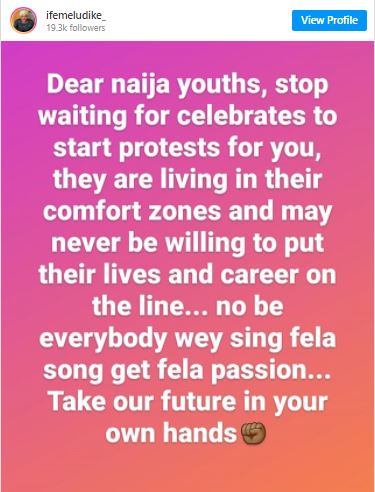 Terror Jr – Running From The Sun
8 hours ago

Oscar Mbo – I Come to You Ft. China Charmeleon
9 hours ago

The Right Stuff
14 hours ago

The Walking Dead: World Beyond
15 hours ago