Wizkid Involved In Another Messy Scandal, Fails To Show Up For A Show In UK After Collecting Money (See Details)

Wizkid is allegedly in a new scandal, and this time, it's massive.The pop star was allegedly paid to perform at an event -Safari night 3- organised by a certain Humble Entertainment in Leicester, UK on Thursday, May 26 2015. 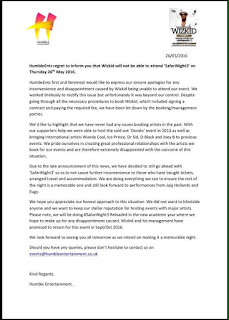 However, according to the organisers, he didn't show up.A statement issued by the company, said, "despite going through all the necessary requirements to book Wizkid which included signing a contract and paying the required fee, we have been let down by the booking/management parties."

Though Disturbing London deals with his international bookings, Wizkid's Nigerian management led by Sunday Are has feigned ignorance of the Safari Nights 3 gig which in the past has been attended by A-list artistes such as Davido, Wande Coal, Ice Prince and so on.

Read what Sunday Are tweeted beneath...

'@Lilkankz please always get your facts right. I don't know about this. Nobody discussed this with me.

Ok thank you. Just to clear myself once again. I don't anything about that booking'
Betting Tips on Whatsapp News Updates
Subscribe to Youtube
Related forums

If Wizkid is Messi and Davido is Ronaldo, Who is Burna Boy?