Comedian Seyi law has reacted to the report that he slapped a security guard named Peter Ethan, at the Eko Hotel and suites, Lagos.
According to a report by Vanguard, Seyi Law ferociously slapped the security guard across the face three times, as he was trying to maneuver his way out of Eko hotel, just after the conclusion of Kiss Daniel’s album concert in the early hours of Monday last week.

Explaining his own side of the story, Seyilaw took to his Instagram page to also tender an apology. 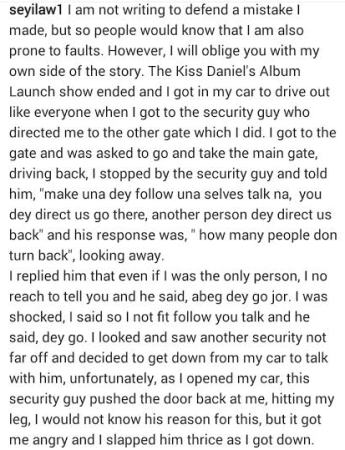 Comedian AY and wife, Mabel jubilates as they celebrates their anniversary

Guardians Of The Galaxy 3: Every Possibility For Where Gamora Is