His choice as the Chairman, All Progressives Congress (APC) National Campaign Council (NCC) for the October 10 governorship poll in Ondo State took few party faithful by surprise. But for party bigwigs, it was not out of place. For them, Lagos State Governor, Babajide Sanwo-Olu is a workaholic who puts up no airs, hence his choice.

Determined to keep Ondo State within its fold, the leadership of APC saddled the Sanwo-Olu-led Campaign Council with the onerous task of rallying all stakeholders and leading the party to a resounding victory. Shortly after its inauguration in Abuja, Sanwo-Olu told supporters that it was the beginning of the party’s march to another victory in Ondo State. 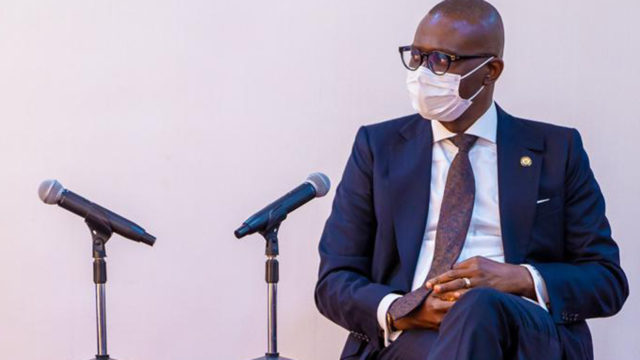 He said the journey was going to be a repeat performance of what the party did about four years ago, when Ondo people trooped out en masse to elect Governor Rotimi Akeredolu (Aketi) as their sixth executive governor. He added that the experience would, however, be different this year considering that APC’s victory would be landslide!

According to Sanwo-Olu, APC’s confidence of coasting to a landslide victory in Ondo is buoyed by “the giant strides of Governor Akeredolu in different areas of human endeavour.”

“We know that since the APC-led government of Governor Rotimi Akeredolu was sworn in on February 24, 2017, Ondo has moved from her hitherto parlous state and has returned to a trajectory of growth and development. This is a major feature of our party. We pride ourselves as harbinger of peace, progress and purposeful leadership wherever we have our foothold,” he said.

But how does he see the task at hand personally and what are the campaign council’s plans ahead of election? Sanwo-Olu noted that the decision of the Chairman of the Caretaker/Extra Ordinary National Convention Planning Committee, Governor Mai Mala Buni and other members must have been a difficult one, considering the number of very eminent individuals and highly qualified personalities in the party. As such, he said the task would be approached with the highest sense of responsibility.

He said: “We know that the people of Ondo State cannot afford to return to retrogressive life after experiencing progressive governance offered by the APC. The people of Ondo were dissatisfied with Iroko’s eight years of motion without movement, so they decided to give the progressives the opportunity and so far, Governor Akeredolu has done well. He has impacted meaningfully on the lives of the masses, the middle class as well as the upper class of Ondo residents. Therefore, all the 104 members of the APC National Campaign Council for Ondo State Governorship Election will roll up our sleeves and work hard for the victory that we truly deserve.”

In reaction to allusions that his choice as the chairman of the campaign council tacitly implies an endorsement of the National Leader of the party, Asiwaju Bola Tinubu, of the candidature of Governor Akeredolu, Sanwo-Olu said the endorsement was not just of Tinubu but a collective one.

He further explained:“In this endorsement you have seen Senator Ajayi Borofice, Olusola Oke, you have seen meetings where Isaac Kekemeke was in attendance and you have seen meetings where Dr. Olusegun Abraham was in attendance. For them, after the primaries, they all came together even before our choice in the National Campaign Council. In Ondo State, they have all gone ahead to resolve their problems by themselves and all of them have said they would work together to support the candidacy of Governor Akeredolu. So, it is a unified thing. They have made our work a lot easier for us.”

He, however, noted that the most critical issues in all of these are about the Ondo people, good governance, what the governor and the APC were doing and have promised to further do. He therefore assured the electorate that having started as a true progressive, Akeredolu would not only take Ondo to a higher level, but people will see real governance and people-driven governance like never before.

“With the good job the governor is doing, all stakeholders have endorsed that he continues in office. The least we can do at our end now is to support that convergence; that is why we are here.”

Sanwo-Olu implored the opposition party, the Peoples Democratic Party (PDP) to join hands with the ruling party in ensuring that the campaigns are issues-based. He said the APC would ensure that it campaigns on the platform for the people and citizens of Ondo State to see why they need to continue with the progressive government.

He urged party members to remain steadfast ahead and through the election. He assured the Mala-Buni-led National Convention Committee and President Muhammadu Buhari that Ondo will remain within the fold of the APC. He also called party faithful to support the committee to achieve the task at hand.