‘Why Nigeria’s democracy is not working’

Alhaji Attahiru Bafarawa, a former Sokoto State governor, in this interview with LEO SOBECHI, says Nigeria´s democracy is not working because political institutions are not doing their work. He insists that political parties should play the role of an umpire to make the system effective. 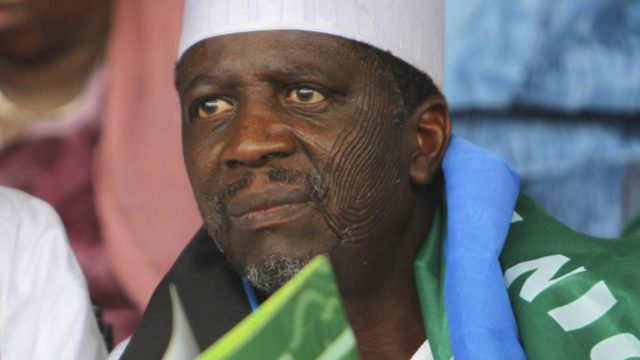 Why is it that politicians and the people don’t share the same experience about Nigeria´s democracy?

Parties are the umpires. When you are elected as either a governor, as a president or whatever elective office you contested under the platform of the party, you are just a representative of that party. Therefore, the manifesto of that political party is the one the president or governor is supposed to start implementing. In the event of not following the manifesto, the umpire, the leadership of the party will blow the whistle to Mr President or the governor.

That is where we will have a formidable party with strong leadership that can caution the president or the governors and they will strictly follow the manifesto, the basis for which INEC (Independent National Electoral Commission) registered all political parties.

Also, you see therefore that INEC is not doing its job in supervising parties based on the manifesto, which is their promise to masses and all also the constitution of the party that made INEC to register them.

So provided there is no umpire, the game will not take off; that is the problem we are bound to continue to face unless we realise that the party´s constitution is supreme.

How can party supremacy be achieved?

The only way is that instead of putting every Jim and Jack to become the head of the parties’ leadership, we need people who have the basic ground support. If you are the chairman; you have to be well accepted and trusted by your people to be a party chairman so that they know that you are protecting their interest.

We have to get a leader, who the president cannot say no to. That is the only way that the party´s leadership will be taken seriously. If we have a formidable political leadership that can discipline the president, discipline the governor, the Senator or whoever elected on the platform of that party, then democracy will come to stay. So far as there is no umpire in the game, we will get whatever, that is why when every president comes, he comes with his own agenda; therefore they do not even know the manifesto of their political parties.

Are you suggesting that democracy should be reset, since governors still dictate who becomes the state chairman, the president is also dictating the national chairman and so on?

That is why I said politics would never come to stay in this country, because we are playing the game without an umpire. The umpire is the party.

With all these observations, why did you withdraw from seeking elective or appointive office?

I have to thank God that I am still alive. I am 66 years, I joined politics at the age of 22, I have been playing this game for 44 years from Councillor to the level, which I have reached.

As a national chairman of a party, as a governor, as a presidential candidate, as an aspirant and I am still alive at my age. With the experience I have gathered, I thank God that the young ones are coming up. So, I have to withdraw myself from holding any elective office or appointment, be it a minister or chairman, I will never take any one for the rest of my life.

I will be in politics; I want to know who is going to be my president, and who is going to be my governor. I will advise, I will assist and help whenever the need arises, but for me, I will never in my life look for any elective office or appointment as member of any Board, or Senator or Minister, I am not interested in anything.

I could do training in politics to start advising and training the young ones who need to take politics as their profession.

You said people should not blame Buhari…

People should not start blaming Buhari for whatever he has done, because his training is all about discipline. All his life, he was trained to be a disciplined man and unfortunately, he joined an indiscipline game, which he has not been trained for.

Someone, who has reached retirement age and joined politics. You will never be a PhD holder without learning ABC. There is no way you can be a PhD holder without following the school process of learning before he reached where he is. He did not become a General over night, he started as a cadet before he reached where he was, he was trained with discipline and training and later he became General.

It has been suggested that those in the executive committees of the parties do not have to aspire for elective office so as to be independent of electoral competition and to enforce discipline, is it still possible?

It boils down to the lack of umpire. The unprofessional politicians have taken over the affairs of the polity. Somebody will be a trained accountant general, a military man, retire and will come back and take the leadership of the party after he had been trained in a professional way (theory and practical), then you reached the age of retirement and retired and come back.

But the people who are joining politics are just joining for the sake of being elected into office; they do not have the background of what is going on in politics, because they have not been trained for that. For example, General Muhammad Buhari, by his profession, he was trained to be disciplined, obey before complain. He finished his professional term and joined the undisciplined game, where there is no respect and everybody feels that they are equal and they can talk anyhow without following the rules of the game. It is completely opposite from being a retired General, Colonel, retired Brigadier to come and join politics, it will never match well.

Was the mistake because Nigeria was in a hurry to drive the military away or because the politicians did not guard against infiltration?

INEC recently decided to weed out some political parties on the ground that they did not win election but from what you are saying, it is obvious that INEC is not even up and doing with the oversight and supervising function of the political parties?

Exactly, that is the reason why the work of the party is not just to prepare for election. The work of INEC is to supervise even the elective offices, supervise the manifesto that they submitted for registration, because INEC cannot register any political party without the manifesto.

Does the process of selecting INEC Chairmen or Commissioners play a role in these deficiencies?

I am only trying to tell you that some of those selected, as commissioners do not even know the rules or the power of INEC. Some of them think that their function is just to conduct election, but at the same time, their job is herculean. INEC has overall job to do after preparing election, it is their duty to go with the manifesto of that political party that is deviating and start reminding them that you are out of your way. And INEC is supposed to supervise the political parties to campaign to the masses based on the manifesto, so that the masses will choose a party on the basis of the manifesto and then supervise whether they are implementing it.

If what you are saying falls within the precincts of voters’ enlightenment, what roles is the judiciary expected to play in this democracy?

Who is supposed to do that, it is INEC. They are not doing their job.

The mistake we make is bringing the judiciary into political crises; it is just a waste of time. In the constitution of political parties, all the rules are there to supervise any problem that arises within the party.

And the essence of the constitution and manifesto given to INEC is to supervise and see whether what they are implementing what they claimed in their manifesto.

Are you saying because INEC failed to do its duty, the judiciary intervenes to undermine democracy?

Yes, because they failed to do their duty, the judiciary has been brought in because if they were doing their job, the judiciary will not be called in. For example, the APC (All Progressives Congress) constitution is there, so if INEC follows the rules of APC guidelines, they should not have qualified anybody from contesting in Zamfara State, because the constitution says there must be primaries.

When primary did not take place, why should INEC clear such political party to go against its rules? INEC has their representative that confirmed there was no primary, so how can they qualify their candidate.

INEC claims that pressure from political parties and indiscretion of the National Assembly that took away their rights to disqualify candidates?

I do not want to pre-empt what the National Assembly is doing. I am only talking about what is on the ground and what is happening. What INEC is supposed to do, what the political parties are supposed to do.

Now in the US, the parties are doing their primaries. Do you think if we amend the way we do our party primaries, we can come back to this sanity we are talking about?

Don’t ever mention US to me, please. I do not want that comparison to be made. As I told you, we are playing a game without an umpire, so how do you expect the game to go well when there is no umpire to blow the whistle, when there is a foul? I want you to understand my own argument. We will never get it right until we get an umpire who will blow the whistle when we commit foul.

Now, if young people want to come into politics, are you saying that they should make up their mind if they want to grow in politics without being interested in elective office?

Of course, yes. How many millions of Nigerians do we have and how many political offices do we have? So, when the question arise and you take this seriously, you will help those that got into the office to bring your own thinking, vision and then move forward. It is not a question of the governor. The governor needs people to support him with vision, with advice and everything; that is the reason why he is the governor of the people.