I’ve Dated Women Before, I Don’t Enjoy When Men Chase Me – Bobrisky Opens Up

Popular Nigerian crossdresser, Idris Okuneye Olanrewaju simply referred to as Bobrisky has revealed that he has been in a relationship with women before although he projects herself as a woman. 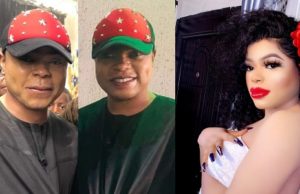 Bobrisky opened up on her life as a transgender with Dele Momodu, the CEO of Ovation Magazine.

According to the bleaching expert, she does not like it when men chase her and does not want to be found in the circles of gays.

However, Bobrisky denied being either bisexual or homosexual when Dele Momodu quizzed her which one of them she is.

You would recall that about 24 hours ago, Bobrisky flaunted a man on her Instagram page he referred to as her lover.

If You Don’t Like Me, Breath Out And Accept Your Fate – Bobrisky Tells Haters

Don Jazzy Reacts After Being Accused of Secretly Sleeping With Men