Opinions are divided about the intention behind the Federal Government’s decision to standardise artisanal and small-scale gold mining in the North, as well as in Osun State, with the majority tilting to the government ceding resource control of gold to the states. 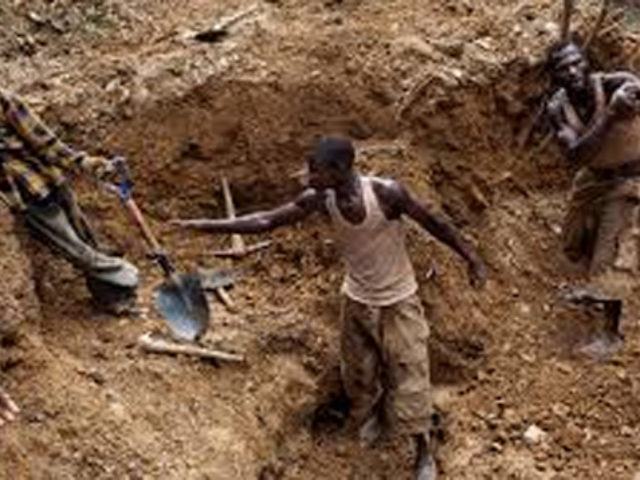 The Presidential Artisanal Gold Mining Development Initiative (PAGMI), is designed to ensure safer and more efficient mining and processing technologies across artisanal mining locations across Nigeria, starting with Kebbi and Osun as the pilot states with intervention in Kaduna, Zamfara, and Niger states to commence immediately after.

Using a Centralized Offtake and Supply System, supported by a Decentralized Aggregation and Production Network, PAGMI will buy all the gold produced by artisanal and small-scale miners and aggregated by licensed buying centres and aggregators for supply to the Central Bank of Nigeria (CBN).

But stakeholders are concerned that the President may have succeeded in granting states in Northern Nigeria, including his home state of Katsina, as well as Zamfara, and Kaduna Osun resource ownership, while deftly neglecting to alter the extractive laws in the Niger-Delta where oil is exploited.

But others say the initiative has nothing to do with geopolitical zones, except for those with proven gold reserves.

Specifically, General Secretary, Nigerian Mining and Geoscience Society (NMGS), Dr. Akinade Olatunji, noted that gold occurrences in Nigeria is confined within defined geologic units, and has nothing to do with politics or geopolitical issues.

He added that PAGMI initiative would make gold mining orderly, as only the Government will buy whatever the registered artisanal miners produce.

He said: “All the issues of illegal mining will become reduced if not eradicated. The issue of smuggling the mined gold to Dubai and other countries will also reduce since the gold is being bought at the international market price. It will also help to strengthen our reserves, as we are acquiring gold assets in Naira and not with Dollars.”

A lecturer at the University of Ibadan, Department of Economic and Mining Geologists, Abdulqaadir Gbadamosi, noted that states that have gold reserves that are economically mineable are majorly in Northcentral Nigeria.

“The only state outside this region is Osun, and alongside Kebbi, they are the two states that will serve as the pilot. It won’t make much sense if Oyo state is included and at the end of the day, Oyo doesn’t produce a single bar of gold.”

He added that while exploring for gold could be carried out anywhere, the smart thing to do is look for gold in places that already have proven reserves.

“Now, we cannot start digging oil wells in the south-western part of Nigeria especially in states like Osun, Oyo and Ekiti, expecting to get hydrocarbons. It won’t happen. It is the same with gold. The Northern states that have gold and Osun will benefit from this initiative, while other regions and states will benefit from other initiatives when they are being set up.”

For PAGMI to be successful, Gbadamosi said there is a need, “To regulate the activities of some foreigners, who are working with the local miners, we have to make our mining industries more attractive to the people thus, creating jobs directly and indirectly. The need to provide an enabling environment for the artisanal miners and a level playing field for all stakeholders is important as well.

“The government also needs to have an arrangement with the host communities, the local chiefs and the community heads that will ensure that their environmental rights and considerations are not trampled upon as dictated by the Nigerian Mining Act of 2007, and where necessary, their royalties would be taken care of. This move will prevent banditry and other forms of stealing and sabotage that impede proper mining activities.”

He added that there was a need for the government to make provisions for standard melting centres that will buy from the artisans at international market prices, to prevent them from selling their produce to foreigners who could beat the prices the government is offering.

Gbadamosi argued that “If the government cannot match the international prices, then they should at least buy at rates higher than the established local rates. Furthermore, we need to make sure a database for those involved with mining our resources, either foreigners or locals, is properly scrutinized and every mining activity going on in the country. A cue could be taken from the way forest guards ensure they try their best to prevent lumbering activities. This should be done by the Nigerian Geological Survey Agency, and The Nigerian Ministry of Mines and Steel Development.”

“Of course, trading with recognized markets like the London Bullion Market Association for gold is paramount. Although oil can be subsidized, gold does not enjoy the same luxury, and it cannot be regulated either, it can only be deregulated at best. Gold must remain exposed to the world market forces and any attempt to limit that by the government will destroy what she is trying to achieve through the PAGDMI.”

Speaking on addressing the funding gaps in the sector, Gbadamosi said: “The Government can also stand as surety for capital loans in form of working equipment and materials that will enhance mining operations, and in turn and use part of the proceeds to offset the loans they took. This will give the government moral authority as sponsors to access materials even at local rates; otherwise, foreign scavengers with a lot of capital to burn will always have the advantage. In

the end, there is really no regulation that can stop miners from being patronised.”

Also, in a chat with The Guardian, a former President, Miners Association of Nigeria, Sani Shehu, urged the government to give the Artisanal and Small Scale Miners (ASM) formal and informal training on how to mine right, taking into consideration health, safety and environmental issues.

“Empower the Artisanal and Small Scale Miners to acquire basic equipment and technology to be able to maximize their output. Also, the Nigerian Geological Survey Agency (NGSA) should make data generated accessible, and continue to organize the weekly minerals clinics for the benefit of the operators, especially ASM. NGSA should guide ASM on good gold deposits. Where such deposits fall within a tenement, the Ministry should liaise for a marginal operation arrangement.

“The Federal Government should protect ASM from exploitative companies, who might quickly take advantage of these initiatives and exploit the miners and the Government. The PAGMDI should be autonomous; its operations should be transparent and guide how refineries and other gold dealers should operate in terms of pricing, advancing and payments.

National President, the Miners Association of Nigeria (MAN), Kabiru Mohammed, urged that miners should be encouraged with funding, like the Anchor Borrowers’ Programme in agriculture, while equipment acquisition and leasing should be seriously encouraged by the government and capacity building.

He said: “Building the refineries without the enabling environment for maximum production by miners will mean nothing. It’s only when the miners produce maximally that the refineries will have enough to refine and process. So, we, the miners need a lot of attention and collaboration with the government to satisfy our needs, and help us out of our incapacitation.”