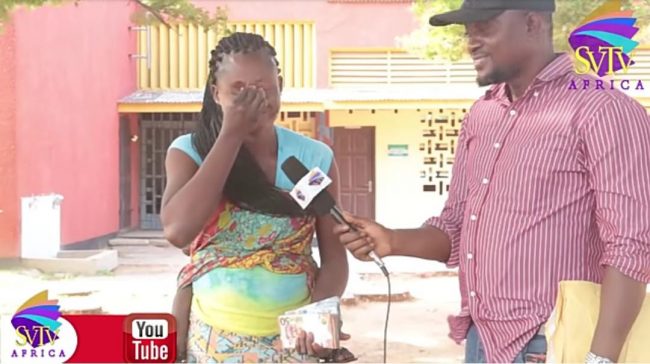 A single mother of four who sells pure water to earn a living, Vida Nsor, was recently moved to tears after she received an apartment, and GHc 7,500 (N504,988.26) to properly and comfortably establish herself.

The kind gesture was initiated by the Stvafrica foundation – the foundation also aired the sachet water hawker’s story on their social media platforms.

The foundation revealed that they were touched to offer their helping hand after watching the way Vida struggled to take care of herself and her children.

According to reports surrounding Vida’s situation, a lot of people donated huge amounts to the single mom, but an anonymous philanthropist went the extra mile to give the woman an apartment in addition.

With tears rolling down her cheeks, the single mom showered blessings on everyone who partook in changing her life for the better.

Watch her speak below,

In other related news, an elderly food seller couldn’t hold back her emotions after a good samaritan surprised her with cash gift on the road.

The good Samaritan pretended to buy food from the woman and while she was about to prepare the food, he brought out a huge sum of money from his pocket and stuffed it in her hand.

The excited woman broke into tears as she poured blessings on the young man who was already glad that he was able to put a smile on somebody’s face.

He urged her to use the money to get some things to expand her business so it can move better. Watch the video here

This goes to show that despite the evil occurrences that is consistently faced by the world on a daily bases, there are still many good people out there changing lives.

BBNaija: Queen In Tears As She Loses Her Pet Fish