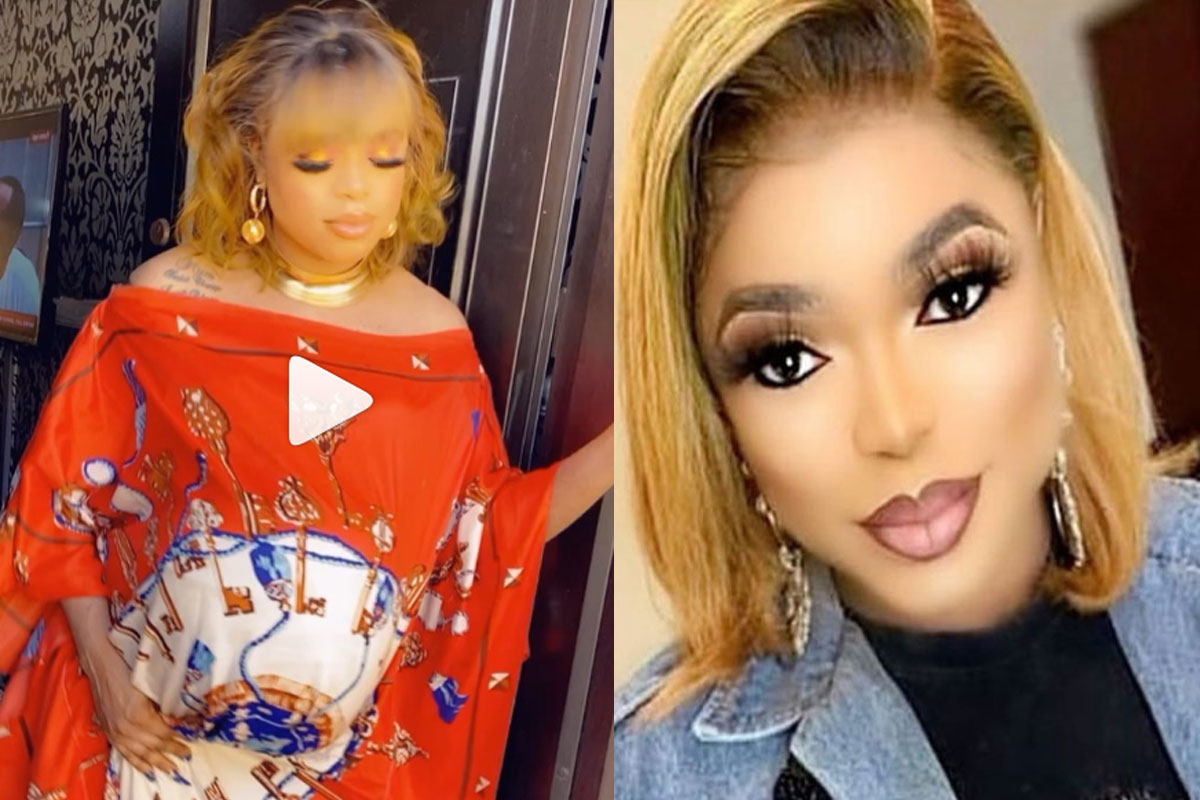 Mavis believes that Bobrisky has now crossed the line with his way of behaving like a lady and also considers his acts as a mockery to womanhood.

She considers Bobrisky’s fake pregnancy and menstrual pains as an act of mockery to all women.

”Bobrisky is starting to cross the line with his antics. He’s starting to make a mockery of women and their struggles for respect within the society.

“For the majority of Nigerians, Bob is nothing but a man who likes playing dress up. They do not take him seriously. Bob says that she’s a woman and wants to be addressed as a “she”. However Bob does not respect women. Bob himself constantly relies on his male privilege to get away with so many things that a woman wouldn’t.

“Bob slutshames women. After Bob has published his latest video about doing runs, hooking up with married men and having sex in god knows where, he’ll still come online and call a woman ashewo and olosho.

“A woman would know better than to publish a video with such content online. But Bob is a man. Men are not called ashewos. Only women are.

“Bob jokes about having periods, but Bob has never had a period in his life. He doesn’t know that for millions of women, their period is a time of the month they anticipate with horror. Tossing in bed, rolling on the floor, stooling and vomiting. Millions of girls around the world skip 7 days of school every month because they cannot afford sanitary pads. Thousands of women have opted for a hysterectomy to free themselves of horrible period cramps. Women ingest a huge amount of hormones every year to either regulate, suspend or ease their periods. But Bob doesn’t know and doesn’t care.

“Now Bob is claiming that he’s pregnant. And nobody is cursing him. Nobody is asking him why he would get pregnant out of wedlock. Where the father is. And if he knows who the father is. Could a woman get away with such?

“What about the women who are desperately trying to have babies and can’t. Now they come online and see this clown with a fake baby bump, making fun of an experience that nobody expects him to have. Nobody will ever insult Bobrisky by calling him barren or a man. Bob is a man!

“Bob is insulting the collective intelligence of women who have to fight every single day for our right to be. I wish he’d borrow some sense, and understand that being pregnant as a single woman who proudly does runs and fucks married men is a privilege that women do not enjoy.

“Well Bob knows why. As a man who dresses up as a woman, he gets to have the best of both worlds. The attention of men who are attracted to trans women without the misogyny that comes with being a woman.

“Trans women want to be included in the feminist discourse, but trans women are also oblivious of what it’s like to be born as a woman and the experience of womanhood from the very first day they are born on this Earth. Nobody hates transwomen for being women. People hate them for giving up their masculinity. It’s a different type of hate and it’s not misogyny.

“Bob can change back into his male clothings and go back to being a man any day he wishes, and the hate will stop. Women cannot do the same. A woman who wants to stop experiencing the hate that comes with being a woman has to take tons of hormones, change her appearance through surgery and do away with her breasts. And perhaps grow a penis. That’s the only way you can escape misogyny. By changing everything about your outward appearance.

“This generation of men who like dressing up as women and reinforcing negative stereotypes – especially those IG comedians, need to be lectured on what it’s truly like to be a woman. It’s not just wigs, make up and clothes. It’s also pain, suffering, humiliation and fear.

“Those are the true reality of being a woman. Everything else is sugarcoating.” 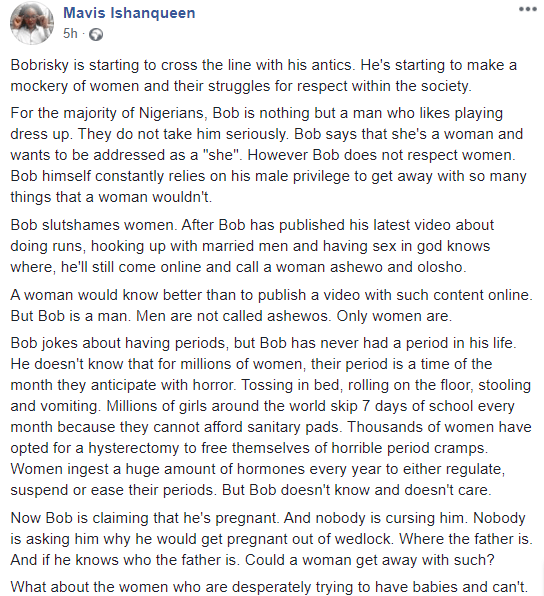 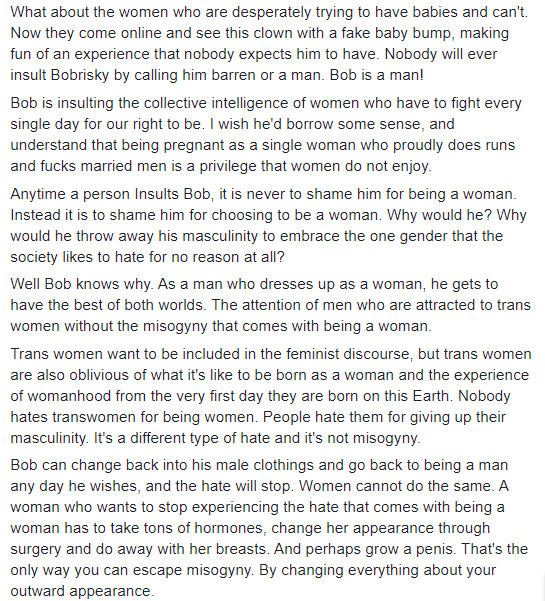