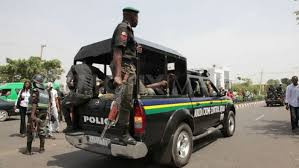 Confirming the incident, the spokesperson of the state police command, Geoffrey Ogbonnaya, said one of Uwaga’s children, Ibeabuchi, reported the matter to the police on July 2. Ibeachi told the police that he left home that morning with his parents quarrelling about an issue. He said he returned home later only to find his late father in a sitting position.

Investigations by the police indicates that the couple had a misunderstanding on that day and this degenerated into a fight in their residence at Ohobo-Afara in Umuahia. The deceased allegedly picked up a machete to scare his wife. The woman who has a huge stature, allegedly held him by the neck and strangled him.

The deceased was immediately buried in accordance with Islamic rites.

Police sources say the elderly woman went into hiding after the incident but was later arrested and is now in police custody.