Residents of Ayobo area of Lagos State yesterday raised the alarm over fuel spillage following a damaged pipeline in the area belonging to the Nigeria National Petroleum Corporation (NNPC). 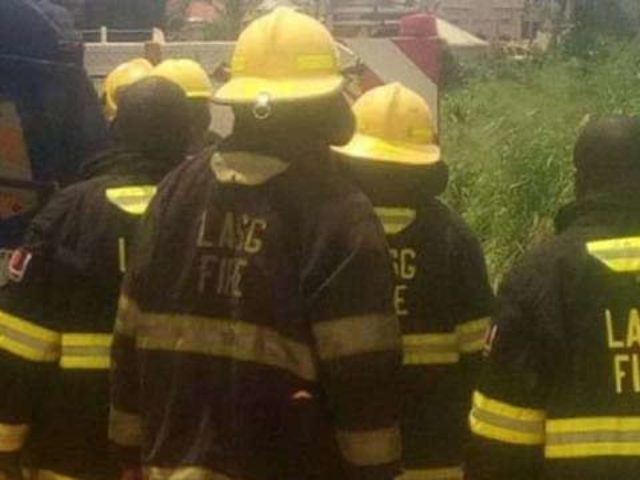 For fear of a possible explosion, they had gone on social media with claims that contents from the leaking pipe from Pipeline Road, Ayobo, Ipaja have spilled to nearby communities including Oju Emi, Ola mummy, Aboru, and Agbado Oke-Odo.

One of the residents, who identified himself as Oluwafemi Adaba-Zioni, in a video clip posted on the micro-blogging site, Twitter, called on the state government and other stakeholders to deploy necessary fire-fighting equipment to prevent a likely outbreak of fire.

Sooner had the video gone viral on social media when men of the Lagos Fire Service stormed the area on stand by at Pipeline Road, Ayobo. The Acting Head, Lagos State Fire & Rescue Service, Margaret Adeseye, said after the concerns raised by the residents, men of the Abesan Fire Station were immediately mobilized by the agency to avert possible fire outbreak from the vandalised pipeline.

Also on ground were men of the Lagos State Emergency Management Agency (LASEMA). Adeseye said adequate measures had been taken to secure the entire area against any form of fire disaster.

She explained that preliminary reports carried out by the agency showed that the leakage occurred in NNPC pipeline conveying PMS at Ipaja at about 9:00a.m. While assuring Lagosians that possible danger would be averted as the situation is under control, she added that the NNPC was contacted and immediately shut down the line pending the arrival of engineers to site to make necessary repairs.

Meanwhile, the NNPC, in its reaction has called on members of the public to discountenance reports of a possible fire outbreak from a vandalized point on its pipeline at Aboru canal in Alimosho Local Government Area of Lagos State, saying that the there is no such hazard as the line in question has since been shut down for repairs and presently contains only water.

The corporation, in a release by its Group General Manager, Group Public Affairs Division, Dr. Kennie Obateru, explained that the Atlas Cove – Mosimi stretch of the System 2B Pipeline was shut down on June 25, 2020, to enable comprehensive maintenance of some segments of the pipeline.

The NNPC said the repair work was on the last stage of completion, which involves hydro-testing – a process of pumping of water through the entire pipeline for integrity test and leak detection – to ascertain availability of the pipeline for pumping products.

“The corporation noted that following a report from the dedicated patrol team about a leakage at a point in the Aboru Canal this morning, water pumping was suspended immediately at 9:27a.m. to enable the maintenance team effect necessary repairs. The NNPC urged residents of the affected community to remain calm, as there is no possibility of a fire erupting from the leakage point,” the statement said.