UPDATE! Lady Who Killed Her Lesbian Lover In Delta State, Arrested In Enugu

Men of the Delta State Police Command have arrested a lady, who goes by the name, Spicykvng Vee, for allegedly killing her female lover, identified simply as Vivian, at the victim’s place of residence in Asaba. 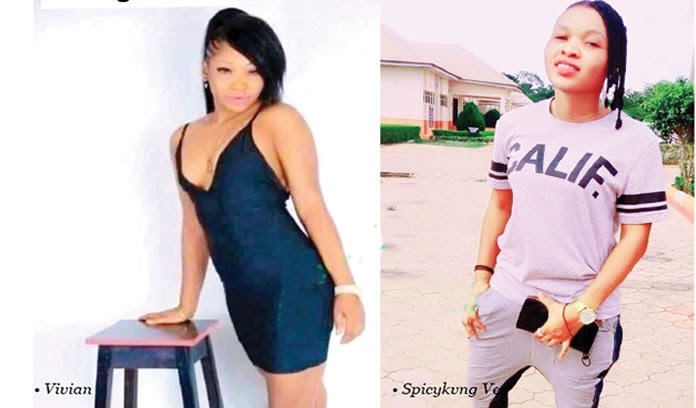 PUNCH Metro was presented with two accounts of the circumstances surrounding the victim’s death.

The first account had it that the suspect, Spicykvng Vee, who was alleged to be lesbian, reportedly killed Vivian, her girlfriend, in a bid to prevent her from exposing the fact that she caught her sleeping with a man.

Another account had it that the suspect allegedly killed Vivian, because the victim’s mother was against Spicykvng Vee living with her in the apartment she rented for her daughter.

After perpetrating the crime, sources gathered that the suspect allegedly abandoned Vivian’s corpse in the apartment, stole her television and generator, and fled to a hideout in Enugu State.

While in Enugu, the suspect reportedly informed Vivian’s mother that her daughter had travelled, but an offensive odour emanating from the victim’s room made neighbours to discover her decomposing corpse on Monday, June 15, 2020, four days after she died.

It was learnt that a disagreement ensued between the suspected lesbian lovers when the deceased reportedly caught Spicykvng Vee cheating on her with a man.

One Mimi Hightension had in a post, which was reposted on Instablog9ja, said Spicykvng Vee “taught (thought) she will broadcast her name unto say she be stud and there were having a serious issue before she caught her fucking dick, so that’s why she stabbed her and ran away. That’s the confession spicy made.”

Whatsapp chats attached to the post revealed that the suspect perpetrated the crime while Vivian was asleep and that after the incident, she fled to Enugu, with the landlord’s son, who was reportedly arrested and gave a hint on what transpired between the two supposed lovers.

“In d midnight wen the gal sleep, she stab her after killing her she use cloth to cover her clean the blood she carry the late girl TV Her generator n some of the gal property n ran to Enugu hoping that she free. She call d mother of d gal that her daughter travel. It was after four days that d notice fly full everywhere. D call d landlord because he is not staying there,” the conversation read in part.

One Greens Judith, who claimed to be Vivian’s childhood friend posted, “I know when they had issues, we were chatting about it weeks ago and she told me she was going to arrest her stud in her house.”

Reacting to the incident, one Happiness Nwanyalugo, condemned Spicykvng Vee for allegedly killing Vivian and stealing from her.

“Any frustrated human being in Nigeria can do and undo. So ashamed of this; Spicykvng Vee and her likes are out there. How can someone be that carlos (callous) and mean to the one they claim to love? She killed her and still stole her TV and generator from the victim and ran to Enugu.”

Sources gathered that Spicykvng Vee was arrested in Enugu and reportedly confessed to the crime.

Another narrative attached to the post read, “She is in police custody as I am talking to you now. So she confessed that the problem she had with her girlfriend was that the girlfriend came to her house when the stud was having sex with a man. After a while, she went and beg the girl to forgive her after the girl forgive her and so that the girl will not come to Facebook and publish it. So she has to stop the girl by stabbing her.”

Confirming the incident, the state Police Public Relations Officer, Onome Onovwakpoyeya, said the suspect was trailed to Enugu, where she was arrested, adding that she had been charged.

“I don’t know about them being lesbians, but I know that they were living together. The information I have is that the one, who was killed, was the owner of the apartment and it was rented for her by her parents.

“But the mother didn’t want her to continue to accommodate the other girl and she told her daughter, who equally conveyed the information to her friend; we were told that the mother said her daughter would regret that decision.

“The girl excused the friend, thinking that she was going to move out of the house, but when she got to the house, she didn’t see her friend, so she entered and while the host was asleep, the friend stabbed her several times and padlocked the door from the outside. After some days, neighbours said they saw the victim go in but had not seen her come outside. So, they broke in and saw clothes.

“The neighbours saw her already decomposing corpse underneath the clothes. Our personnel found out that the victim didn’t live alone, because somebody was living with her, and they were able to trail her to Enugu. She has been charged and the case has been adjourned till June 29, 2020, but because the correctional facilities are rejecting new inmates due to the COVID-19 issue, she is with us.”