Cristiano Ronaldo was denied a third straight Ballon d'Or yesterday evening - and this is how he reacted to the news that Lionel Messi had been voted as the best footballer on the planet in 2015. Barcelona superstar Messi won the title for the fifth time, beating Ronaldo and teammate Neymar in the voting. Messi took top spot with 41.33 percent, ahead of Ronaldo with 27.76 percent. Neymar finished in third with just 7.86 percent. 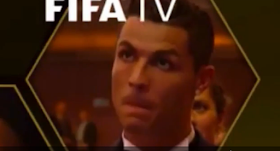 "It is a very special moment for me to be back here on this stage, winning again another Ballon d’Or after being there in the audience watching Cristiano win," he said.
"It’s incredible this is my fifth. It’s much more than anything I’ve dreamed of as a kid.
"I want to thank everyone who voted for me and I want to hank my team-mates. And lastly, I want to thank football in general for everything it has brought me. Both the bad and the good. Because it has made me learn and grow."

Earlier in the night, Messi was named in the FIFPro World XI , alongside Ronaldo and Neymar.

My Greatest Regret Was Not Grabbing Him With My Two Arms - Princess Shyngle Says After Meeting Hollywood Actor, Idris Elba