The police yesterday said they have arrested three brothers for allegedly kidnapping and murdering a mother of five in Abuja. 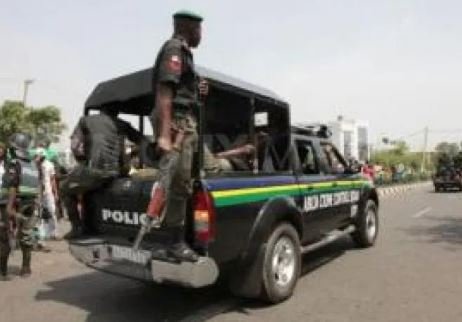 The Force Public Relations Officer, DCP Frank Mba, said the corpse of the woman, 55, was exhumed by detectives as part of ongoing investigations.

“Police operatives attached to the Intelligence Response Unit of the Nigeria Police Force have arrested three suspects namely Johnson Emmanuel, 38; Gideon Emmanuel, 31; and Success Emmanuel, 27, for the kidnap and gruesome murder of one Mrs Janet Nnenna Ogbonnaya on May 14, 2020,” DCP Mba said in a statement.

The incident happened in an urban slum – Wumba. The sparsely populated community is on the Apo-Lokogoma Expressway and about six kilometres to the Apo Mechanic Village.

All of the neighbours to the suspects, approached by our reporter, declined comment.

The residence, a one-bedroom apartment where the deceased was allegedly murdered is situated at Bakassi Area in the community.

The apartment is one of many buildings before a waterway at the end of the community. The community chief’s secretary, Istifanus Danlami, said the suspects were well known in the community, adding that one of the brothers was known as a pastor but could not say if he had a ministry.

Another resident, simply identified as Musa, said the suspects were known for shooting videos.

He said they had posters of video shoots and cinema production which have been ripped off by angry residents. Musa, who packs sharp sand from the waterway, said the suspects were last seen two weeks ago when they were trying to sell the house, where the corpse was buried, hurriedly.

“I thought they had gone to India to shoot videos until the police brought them here on Thursday,” he said.

“Nobody knows the man was into such act,” he said.

Another resident who pleaded anonymity said the police came with two ambulances and several cars, adding that people thought someone had tested positive to coronavirus.

He said the incident shocked the residents. Danlami said the chief, Mr Daniel Zhiba, held an emergency cabinet meeting on Friday where it was agreed that nobody should sell a house without the involvement of community leaders.

“I want residents to be calm as we have made this decision to ensure that such act, the first of its kind in the community, does not repeat itself,” he said.

He could not verify the identity of the person that bought the apartment from the suspects, adding that 90 per cent of such transactions happen without the knowledge of the community leaders.

One of the residents however said such apartments are usually sold between N500,000 and N700,000 in the community.

According to the police, the suspects of same parents, all male and natives of Isiekenesi, Ideato LGA of Imo State, were arrested by the police in their home town where they had taken refuge after committing the crime in Abuja, in order to evade police arrest.

DCP Mba said, “Investigations that led to the arrest of the suspects is sequel to complaints received from one Chinedu Ogbonnaya who alleged that his mother, Mrs Janet Nnenna Ogbonnaya, 55, native of Ozuitem in Bende LGA of Abia State, had been kidnapped and a N5m ransom demanded before she could be released.

“A comprehensive and painstaking investigation by the police operatives resulted in the arrest of the three suspects, whom, in the course of interrogation, revealed that the victim had long been murdered and buried. “Further findings revealed that the victim, a widow, who had been a Facebook friend of the principal suspect – Johnson Emmanuel, was lured from her home in Gwagwalada to visit the suspect.
“The suspect thereafter took advantage of the visit, served her yoghurt laced with drugs and subsequently had her murdered. “The suspect having killed the victim and buried her remains in a septic tank, went ahead to reach out to the family of the victim using her phone and demanded N5m ransom as pre-condition for her release.”

The septic tank where the widow was buried Musa said the police exhumed the corpse and took it away in one of the two ambulances they came with.

The police said the exhumed body was taken to the University Teaching Hospital, Gwagwalada, Abuja for forensic examination.

A Toyota Highlander Jeep belonging to the deceased has also been recovered by Police operatives at a mechanic workshop in Apo where it had been repainted into a different colour, vehicle documents fraudulently changed and ownership of the stolen vehicle criminally transferred to one of the masterminds of the crime – Johnson Emmanuel.

Investigations also revealed that the house where the deceased was killed and buried originally belonged to one of the suspects but was hurriedly sold off to a third party apparently to obliterate evidence. The Inspector-General of Police, IGP M.A Adamu enjoined citizens to be more security conscious and report any suspicious activities within their neighbourhood to the nearest police station.