More than 50 households have been rendered homeless in Minna, the Niger State capital after a tempestuous wind and rainstorm that occurred on Thursday night. 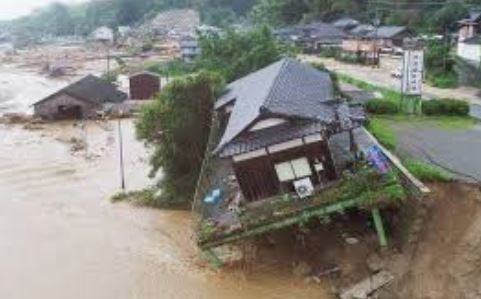 Some of the areas affected most include Gidan Mangoro, Gidan Kuka, Kpakungun, and part of Tunga.

The rainstorm which occurred for about three hours, destroyed houses, schools, churches, mosques, and shops.

Some of the buildings had their roofs blown away while some had their fences pulled down. The rainstorm entirely destroyed some other buildings and equally pulled down many electric poles.

A visit to Gidan Mangoro community on Friday morning showed the high level of destruction as the reporter met a number of the house owners trying to salvage what was left of their properties.

“Where would we get the money to rebuild another house? I have not been going to work for over one month now since this lockdown. Where will the money come from? Will my children be sleeping outside? My sister, I am confused”, one of the residents, Musa Ali said.

When contacted, the Director-General of the Niger State Emergency Management Agency (NSEMA), Alhaji Ibrahim Inga said the agency was aware of the destruction adding that they were compiling the report which would be forwarded to the state governor for necessary actions.

Jorginho Scores From The Spot Twice Against Crystal Palace

DJ K Gold – Are You There Street Mixtape

Princewill Chinonso – I Am