“When is Jesus coming so I can quickly remve my Wig, Eyelashes and Nails” – Bobrisky (photo)

He posted asking his fans and followers to tell him when Jesus Christ is coming because he heard of his coming but doesn’t know when exactly that will be. Adding that he wants to know exactly when Jesus Christ will come so he can take off his wig, eyelashes and Nails before Christ comes. The reactions from his fans and Followers were just hilarious.

“I was told Jesus is coming soon… Can someone tell me when so I can quickly remove my Wig, Eyelashes and Nails” 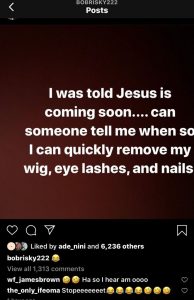 Bobrisky Sprays Money On Nengi At Her Birthday Party