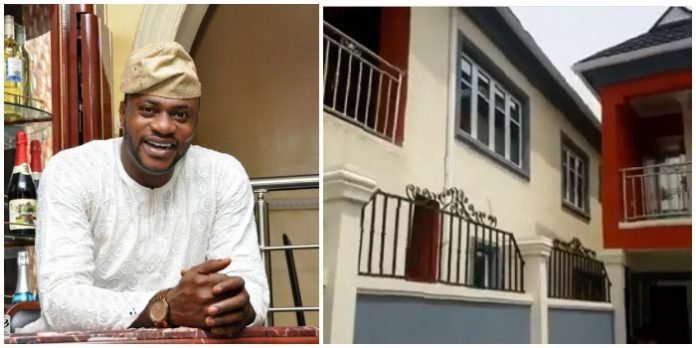 Odunlade Adekola is one of the prominent Yoruba Nollywood Actors in Nigeria. His role in movies most times cracked people up as he is a comic actor. Odunlade Adekola is a brand ambassador to big companies in Nigeria due to his sense of humor and great personality. Having a new house is really a reward for his hardwork.

In related news, the actor has finally broken silence on viral reports that he is set to assume the most coveted throne in his hometown, Otun, in Ekiti State.

Odunlade cleared the air on this rumor on Friday while shooting a film titled: ‘Compromise’ at a location in Ologuneru, Ibadan, Oyo State capital.

Odunlade who was in the company of Adebayo Tijani, Taiwo Ibikunle and Wunmi Olabimtan, the producer of the film and other popular actors, played the role of a rich man who had earlier suffered in the movie.

A reliable source at the location reveals that while people at the location were ailing him as incoming king of Otun in Ekiti State, he quipped, “how can I become a king and as well be on the location. Disregard the rumour, I’m not a king. I still remain your actor.