There has been a peace deal with bandits in Sokoto leading to the surrender of illegal arms and possession. 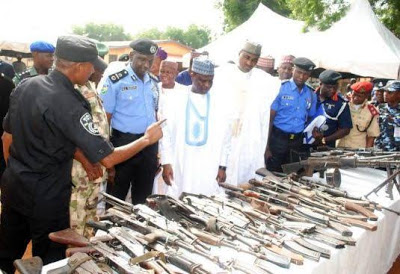 The peace deal reached with bandits in Sokoto State has resulted in the surrender of weapons and recovery of over 300 cows, the State’s Commissioner for Security Matters Col. Garba Moyi (rtd) has disclosed in an interview with Dailytrust.

Commenting on isolated cases of attacks by the bandits, the Commissioner said they were largely executed by fleeing bandits from neighbouring States. “But we are still reaching out to those operating within Sokoto; this is why cases of attacks and kidnapping are very minimal now,” he said.

He disclosed that at the moment only a nursing mother and her child are being held captive by the bandits, saying efforts are being intensified to facilitate their release.

He urged members of the public to report any suspicious movement in their localities to security operatives.

Common Ft. Damien Marley & PJ – What Do You Say Remix

The FaNaTiX Ft. Popcaan & M1LLIONZ – These Streets (Don’t Luv U)

The Saints Magic Power Is Omnipotent