A 96-year-old retired headmaster has explained that in his days as a young man, no woman could resist his charms. 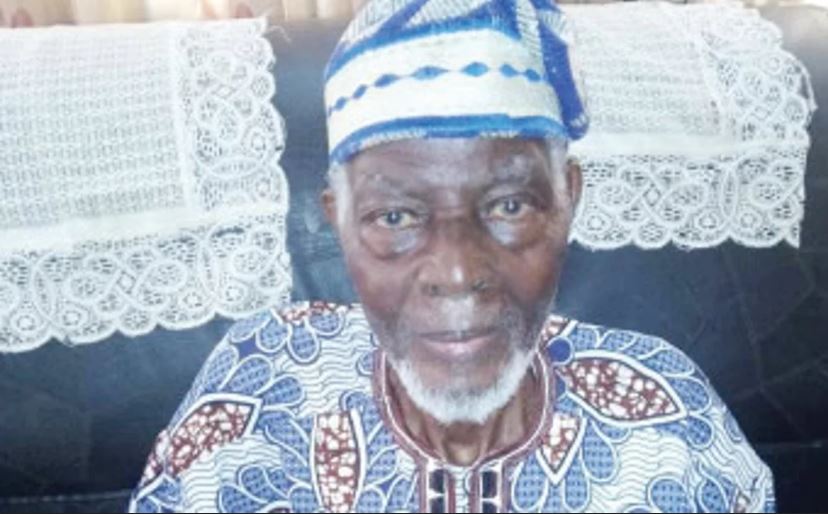 Samuel Adejuwon, a retired headmaster based in Akure, Ondo State, tells PETER DADA about his life, career, family and other issues

You’re said to be 96 years old, how did you know your age?

I can remember that my father took me to Ikere Ekiti from my hometown, Ido-Ajinare, at a tender age, to be living with a relation (woman) so that I could start my elementary school at Saint John’s Primary School. That was in the 1930s.

I started school at that time and I was already grown a bit. That was how we could deduce that I must be 96 at least now. I could remember that I wept for almost a week when I got there. I started Class I because I was a little bit mature. I got to Class II there. After taking an examination, I did Standard I and II but had to continue Standard III in Okemesi Ekiti at Saint Michael’s Primary School with a group of pupils from Ido-Ajinare. We would leave on Sunday evening and come back on Friday evening. I went further to Ijero Ekiti for Standard V and Standard VI. After Standard VI, I started teaching at the same Saint Michael’s Primary School. I taught for four years before I proceeded to Saint John’s Teachers’ College, Owo.

After my training as a teacher in Owo, I started working as a trained teacher. I later became a head teacher at Saint Michael’s Primary School, Ilara-Mokin. As a trained teacher, I was full of pride and people respected me a lot in the community. Ladies always flocked around me.

You look younger than the age you have described, what is the secret?

God is the secret of my longevity.

Did you pick your wife among those ladies that flocked around you in those days?

There, I had two female teachers working with me. One of them was from Ipogun; she was dark and fat, and the other one was fair and slender, but walked sluggishly. When thinking having a wife, I had to consider the one from Ipogun.

When did you get married to her?

How did you woo her?

I was the head teacher then which made me a popular person. Being a teacher then gave one a great chance. Besides, I was living in her father’s house before I wooed her, so it made it easier for me. However, it suddenly dawned on me when I took her home for introduction that like me, she came from a village and I started wondering how the marriage would work. Despite that, I still married her and she loved me.

How did she react when you proposed to her?

Why would she say no? Me, a neat and well dressed teacher! If you saw my dressing then, no lady would see me and not admire me. It was an express agreement.

When you got married, did she live with you or in her hometown, considering how you were moving from town to town as a teacher?

She was with me of course, going with me wherever I went.

You said you were a good-looking teacher, how did you cope with advances from ladies?

I did not look at them. I am a disciplined person and I believed it would lower my prestige as a trained teacher if I became a philanderer. I was known for good principles. Some women didn’t like to be posted to my school. They would say that I did not have special treatment for ladies. And that was true. If you were a pregnant teacher and you came late, I would warn you and tell you that I would not take any action because of your condition. Six months after delivery, such a woman must brace herself or leave. I didn’t accept any nonsense.

How would you compare working with government in the days you were young with the situation now?

Government work was good then. There is nothing good in it now. That’s my view because I believe so much in hard work.

Where did you work as a trained teacher?

I worked at Ido-Ani and Owo. I spent a long time in Owo.

How did you manage to achieve a good balance between your domestic responsibilities and working hard at work?

I’m a man. It is women that cater for children.

But your wife was also a teacher, how did you work out the schedule?

As I said earlier, I warned pregnant and nursing teachers against coming to school late. So, I also warned her against coming late. Though at home, I pitied her a lot because she would go to school and come back with me and then go straight to the kitchen when we got home, while I would be in the sitting room, sometimes dozing off, but she would send for me when the food was ready.

It was because I was a man but the truth is that she was a human being like me. That makes me to pity women.

Were you able to proceed to university after your education at the teachers’ training college?

Yes, I went to the University of Ife (now the Obafemi Awolowo University, Ife, Osun State) to study English/Mathematics Education.

How many children do you have?

I have eight children. They are from two women. The first wife had five while the second had three.

Where are your wives now?

They have passed on.

When did you marry the second wife?

I married her when the first wife died. And since the second wife died, I have not had any wife.

When did your first wife die?

You were already advancing in age when you married your second. Did you marry her as a young woman?

Yes. Would I go and take another man’s wife? I even had a child at 80.

What is your secret, were you using a kind of performance enhancement drugs to make love and impregnate a woman at that age?

It was God’s doing and throughout the time I was married, I had no extramarital affair. And whenever my wives were pregnant, there would be no sex until they gave birth. Then pregnancy period was always like sex holiday for me. I had no mistress or concubine. My sex life was not cumbersome. In fact, I used to pity my first wife during her first trimester of pregnancy. She would be vomiting, spitting and it caused nausea for me but because of the love I had for her, I would still eat her food because the pregnancy was for me.

You said you never had an extramarital affair. Was it a matter of principle for you or did it have to do with your faith?

I never did it. My father didn’t do it and I didn’t copy that from my father.

It was not about my religious faith, because I know some Anglican men that have three wives and concubines so I will say I did that of my own volition.

How did you spend your youthful days?

I spent my youthful days moderately. I didn’t drink and I didn’t womanise, even though I was a very handsome man and women used to flock around me. I was not reckless in my youth. I copied so many things from my father – my father didn’t do many of those reckless things. That was why he was highly respected among his colleagues.

What kind of music do you like to listen to?

How would you describe your life after you retired from the civil service?

I didn’t stop after my retirement from service. I retired in Owo; there was a man then called Famoyegun in the town, he was a very rich man and I loved him because of his lifestyle. He invited me to come and work with him. He was into cocoa and poultry business. I served him diligently and honestly. Some of his customers wanted to corrupt me but I resisted them.

How was your marital experience with your second wife?

After the death of your first wife, was it your personal decision to remarry?

Would I not have somebody to be cooking for me? I was only looking for somebody that would be taking care of me because old age was very much around the corner then.

How convenient was it for to have children after so many years of break following your second marriage?

I bore the responsibilities and consequences – she had three children. Like I said, I had the last one at the age of 80. Fatherhood was not easy for me but I took responsibility for it. Whenever the baby was crying at night, she would wake up and I had to also wake up and we would both take care of the child.

At the age of 80, how did to get the power to be having frequent sex with your wife?

I have told you, I am an exceptional being. For me, sex is only for procreation, so I didn’t just have sex with my wives. And I didn’t fornicate because I stuck to the commandment of God that says, ‘You shall not commit adultery.’

What are the things you miss doing now that you are old?

I don’t think I am missing anything. Many of the things I used to do when I was young, I still have the power to do them now. If my wives were alive now, we would still be having sex because I still have the energy to do that. I recall the last time I had sex with my late second wife, she was surprised. She did not believe I could do the much I did that day.

Did you use any drug to help you have a strong erection?

I didn’t use drugs, even up till now. I am not on any supplement or drugs. I don’t visit hospital and I am hale and hearty. I thank God for the grace, I believe God created me specially and I didn’t misuse my body when I was younger. As I am now, I live upstairs, so I still go up and down the stairs. I still walk to church. It was recently that my daughter bought a walking stick for me, but before then, I walked around and did many things by myself.

Do you have any regrets in life?

The only regret I have in life is that my wives died, leaving only me.

What would you describe as your sad moments in life?

It was when my first wife died. She fell ill and died; I was very bitter and sad. But I thank God today that all her five children are alive and doing fine.

What is your favourite food?

My favourite food is pounded yam.

When would you describe as your happiest moment in life?

Whenever my wives delivered babies, I was always very happy.

What are the things you can point to as your achievements in life, that you derive joy from?

My greatest achievements in life are the children given to me by God. They are intelligent and have character traits that I so much desire. They are not thieves.

Man Sentenced To 4-months Imprisonment For This Ridiculous Reason

If A Man Is 35 And Above, Not Married But Is Constantly Changing Women Like Pants, He Is Bis3xual- Princess Shyngle