A young girl named Angel Obas, has allegedly committed suicide after her mother allegedly accused her of theft at their home in Sapele, Delta state. 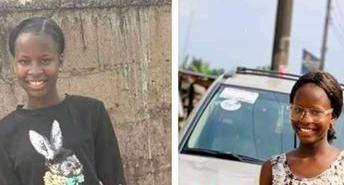 According to Sapele Oghenek, the young girl lived with her mum at Ugberikoko road in the city.  On Tuesday March 17th, the mother of the deceased reportedly accused her of stealing some money she kept in their house. In anger, Angel was said to have taken up a bottle of herbicide and drank it.

She was rushed to the Delta State University Teaching Hospital in Oghara in Delta state where she eventually died on Friday March 20th.

''Anger na very bad thing. I dey always dey advise people wey get hot temper say make dem dey always dey control am, because at the end of everything, the damage wey the hot temper go cause go dey very irreplaceable.
Report reach us for studio say few days back nai this girl wey dem dey call Angel Obas wey dem dey stay for Ugberikoko Road for the end of Otuedor by Uko Road, just because say her mother accuse her say na she take money wey dey lose for their house. Based on say she be girl wey get hot temper, nai she go drink chemical wey dem take dey kill grass that on Tuesday. Nai dem rush her go Teaching Hospital for Oghara and na yesterday nai she finally die.
This one na sad news. Who we go blame for the death of this girl???'' Sapele Oghenek wrote in pidgin English. 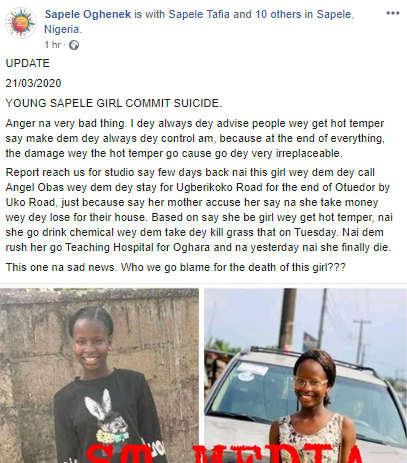