Meet The Notorious Criminal Who Terrorized The People of Lagos and it's Environs.

Ishola Oyenusi , popularly known as Doctor Oyenusi, was a notorious armed robber who terrorized the people of Lagos and other neighboring cities in the 1970s. Ishola Oyenusi and his gang of six were highly skilled in snatching cars, robbing banks, factories, stores and killing people like chickens. 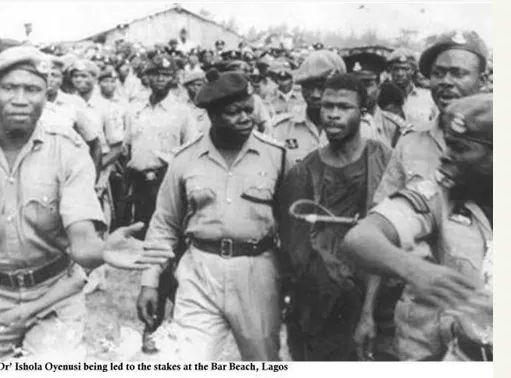 Doctor Oyenusi , as he was called, was not a doctor by profession but adopted the title for the fun of it. The evidence lies in a confession he made few minutes before his execution. He confessed that his parents were not capable of furthering his secondary school education and that was what forced him into robbery. So without having a secondary school education, Oyenusi by no way could have been a medical doctor.

Oyenusi started off his robbery career by snatching a car (whose owner died in the process) just because his (Oyenusi) girlfriend needed some money. It was said by some people that Oyenusi was romantic. He sold the car at the price of N400 and gave the money to his girlfriend. It was also said that Oyenusi was hot tempered and arrogant. During his arrest, he thundered down on a police officer who was ushering him around. He said, “people like you don’t talk to me like that when I’m armed, I gun them down!” 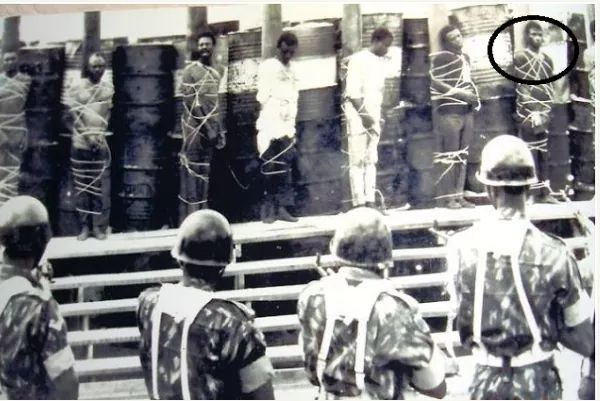 Oyenusi came into limelight after the Nigerian civil war ended in 1970. He robbed banks and people in both daylight and night, and he never let any of his victims live to see another day, he killed them all! This earned him the name “ Doctor rob and kill “. At the height of his horrific reign, Oyenusi bragged that “ the bullet has no power “. He probably forgot that he who live by the sword will surely die by the sword. Oyenusi was so infamous that he was regarded by some people as the “first celebrated armed robber in Nigeria“, and after him was Lawrence Anini , Babatunde Folorunsho (Baba oni lace), Shina Rambo, Buraimo Jimoh and others. 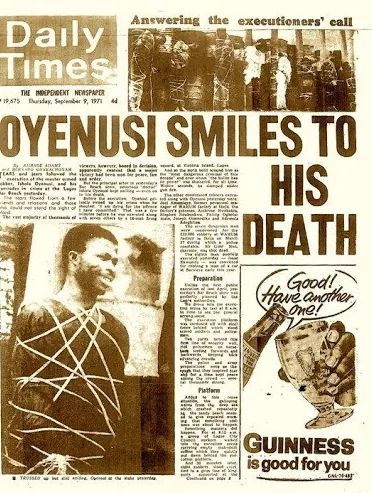 However, nothing lasts forever, and as the adage says, everyday belongs to the thief while a day belongs to the owner. On the 27th of March, 1971, Oyenusi was nabbed by the police during one of his robbery operations in which he and his notorious gang killed a police constable named Mr. Nwi and stole $28,000 as at then. Cloud of shame hovered above Doctor Ishola Oyenusi as he was casted before the law and found guilty then sentenced to death by firing squad. Oyenusi confessed that he was not to die alone because he did not commit the crimes alone. He vomited the names of other members of the gang which were as follows: Joseph Osamedike, Ambrose Nwokobia, Joel Amamieye, Philip Ogbolumain, Ademola Adegbitan and Stephen Ndubuokwu. Back then, public execution was the order of the day, so when Oyenusi was ushered to the popular Bar Beach in Lagos where he was to be executed, over 30,000 Nigerians were happily and excitedly waiting to see the man who had terrorized them get riddled by hot bullets. It was said that some civil servants even brought a coffin to the execution ground to mock the once mighty robber kingpin who was now nothing but a scapegoat whose breath would be exhausted in any moment.

Trucks carrying Oyenusi and his executors arrived at the execution ground around 10:am. Doctor Oyenusi, his gang members and one other criminal got down slowly. People jeered and booed them, especially Oyenusi who they had really trooped out to watch die. Oyenusi donned a dark long-sleeve shirt and had his hands tied behind him. He was sweating profusely but managed to smile all the way to the stakes. He kept smiling, smiling and smiling but could still not hide the agony and terror written boldly on his face. Few minutes before he was shot, Oyenusi told journalists that he would not have ventured into armed robbery if his parents were capable of sending him to secondary school. He also said “I am dying for the offense I have committed “. Oyenusi and other criminals were fastened to the stakes. The soldiers lined in front of them and aimed their ever ready guns. Some of the criminals yelled their last words of protest at the cameras. Then a loud voice let out the word “ fire “! Oyenusi and other criminal’s body were sprayed with bullets. That was the bitter end of Ishola Oyenusi who lived by the bullets and died by the bullets. The execution of Doctor Ishola Oyenusi sent the streets of Lagos deserted at night. Families locked themselves behind doors for the fear that some of Oyenusi’s boys might retaliate.

This fear lasted long that even in 1977, the veteran movie director, Eddie Ugbomah, called for actors to play the role of Oyenusi in a movie he was about to produce titled “The Rise and Fall of Dr. Oyenusi “, but no actor was brave enough to step forward to play the role. They all feared that Oyenusi’s boys might show them pepper. Eddie Ugbomah had no choice than to play the role of Oyenusi himself. In the movie, he revealed the secrets of top Nigerian officials and military men backing Oyenusi and his gang by providing them money and weapons. As expected, Eddie Ugbomah was threatened and later, his store was looted. He was told in a letter to stop shooting the movie and everything would be returned to him. But Eddie Ugbomah proved not to be a coward by eventually releasing the movie in 1977. In recent times, a Nollywood actor, Odunlade Adekola , also released a movie (Oyenusi) detailing the life of Ishola Oyenusi, the notorious Nigerian armed robber.

The name Ishola Oyenusi will forever be remembered in the history of crime in Nigeria.