Six People Who Turned into Animals Through Body Modifications

Ever had a love for something that you had to literally be that thing? Well these people loved animals so much that they had to turn to their favourite animals.

They achieved these by spending a fortune on body modifications and tattoos and piercings.

These people took the meaning of "animal spirit" to a whole new level.

Here a 6 people who turned to animals, literally. 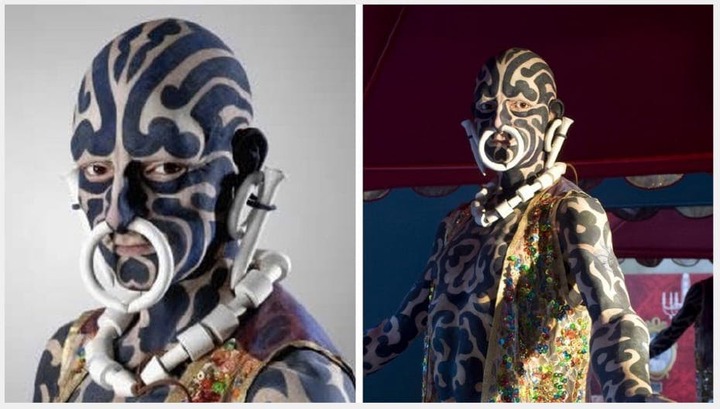 Horace Ridler, also known as the Great Omi is one of the most heavily tattooed men ever lived. He started getting tattoos when he was serving the British army. After his service, he started getting financial troubles and decided to monetize his tattoos by entering the show business. 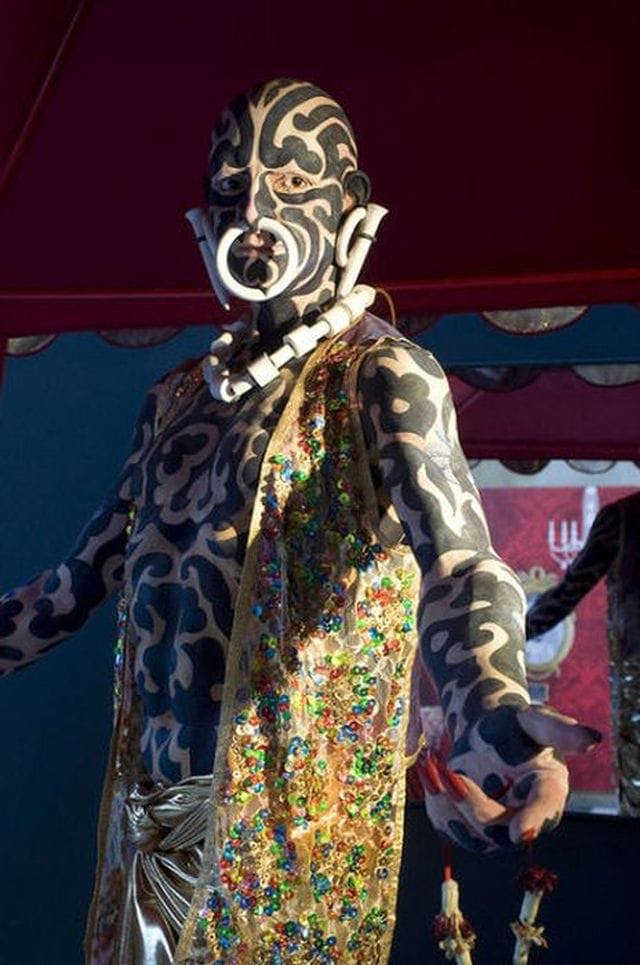 Ridler visited London's famous tattooist, George Burchett to help his plans of becoming the finest tattoo attraction around a reality.

Shortly before his death in 1969, he said "underneath it all i'm just an ordinary man". 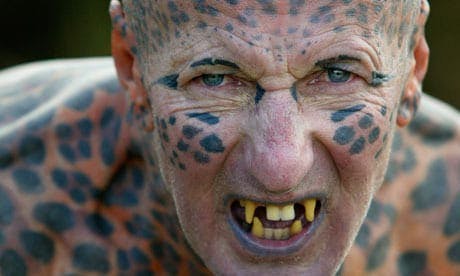 Tom Leopard, as he formerly refers himself was previously named by Guinness World Records as the most tattooed man. he got famous when he spent over £5,000 in modifying himself into a leopard. 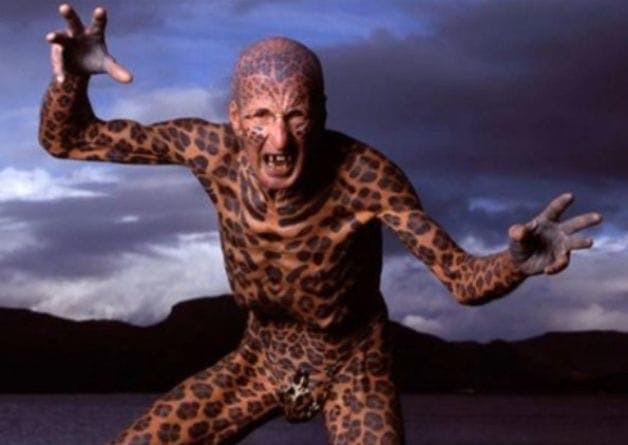 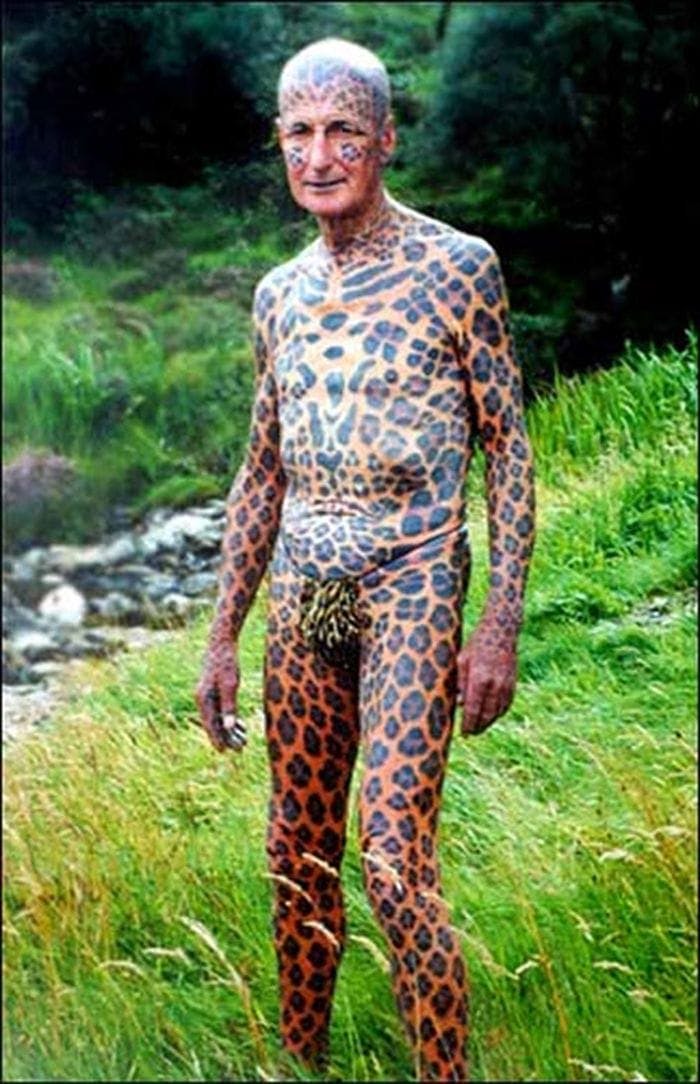 He then went on to retire in 1987 living in a small hurt and only leaving to restock supplies and pick up his pension (i guess the leopard needed money after all). 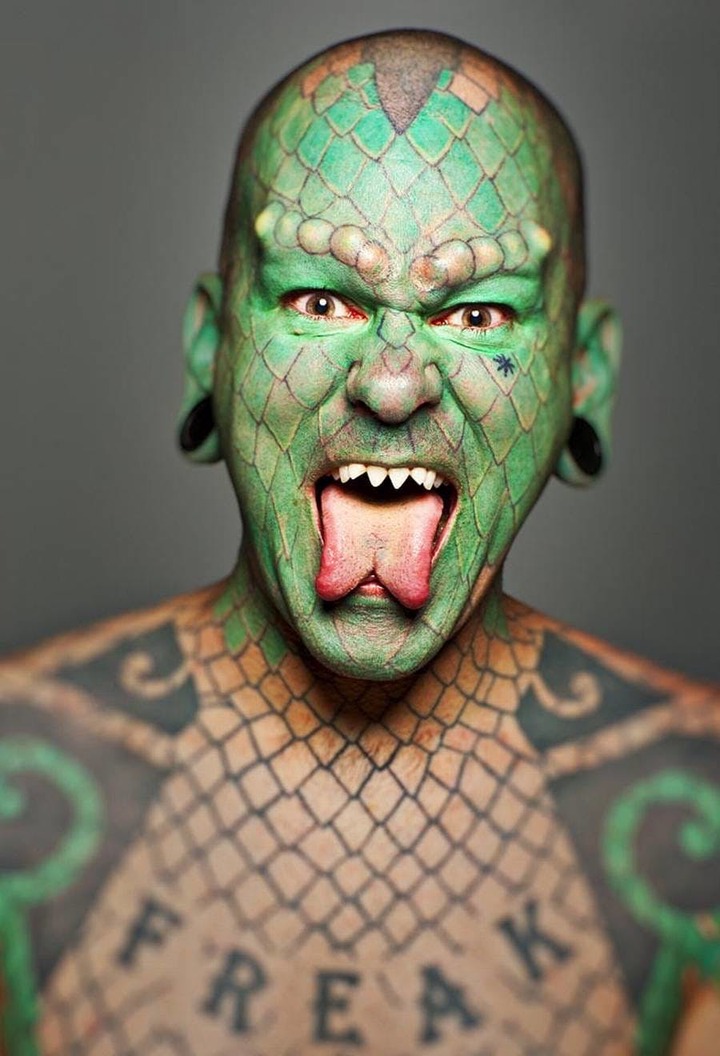 In order to pursue his artistic dream, Erik left his doctoral program in philosophy. That decision paved way for his persona as the Lizard man. He can be easily identified by his green hued scale-like tattoo, his filled teeth and his splitted tongue. 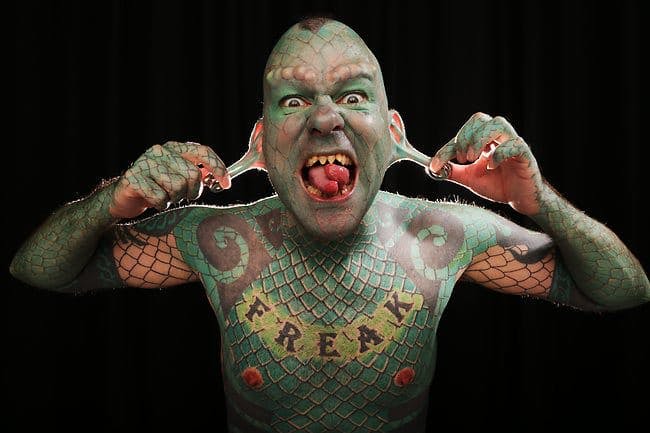 Erik is well known for his outstanding one man shows. He had worked in suspension groups, written columns for BMENews, written a book and he also has a band called Lizard Skynyrd. 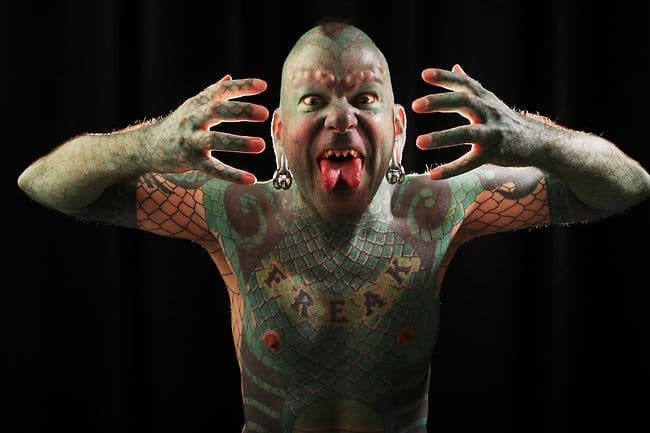 Personally, i think this one is the collest to hang out with. Dont you think so too? 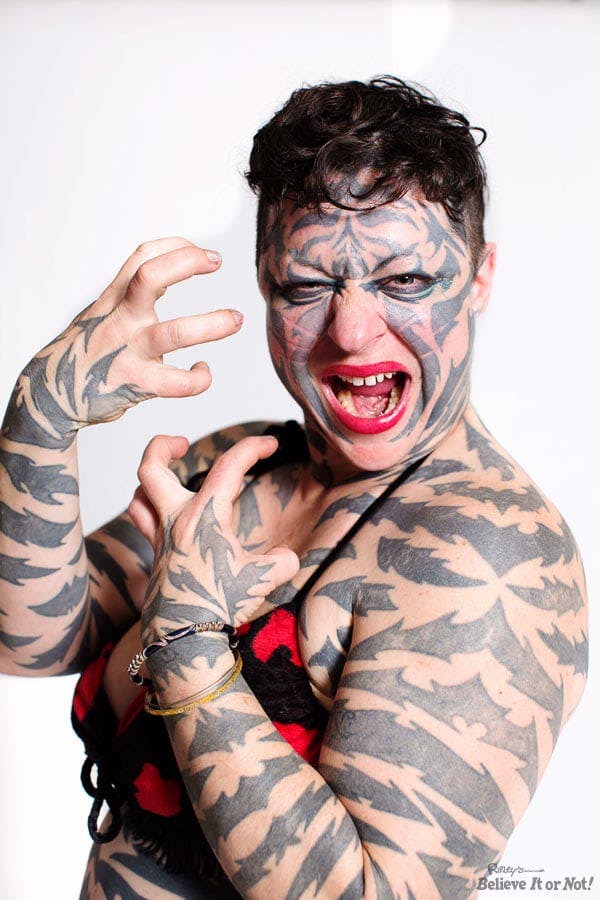 Katzen is a real-life cat woman with over 90% of her body tattooed with black feline stripes. The "whiskers" on her face were made through "Scarification" but Katzen once had genuine tiger whiskers sent to her by zoos aroun the world. those whiskers were implanted into her cheeks thorough piercing rings designed for holding them. 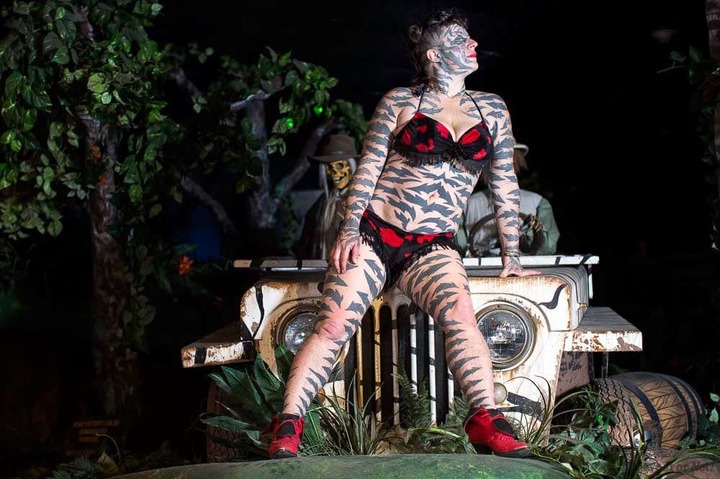 The mother of two from Austin, Texas, began over a decade ago. She had to go to over 160 tattoos artist with 23 working on her at a particular point. 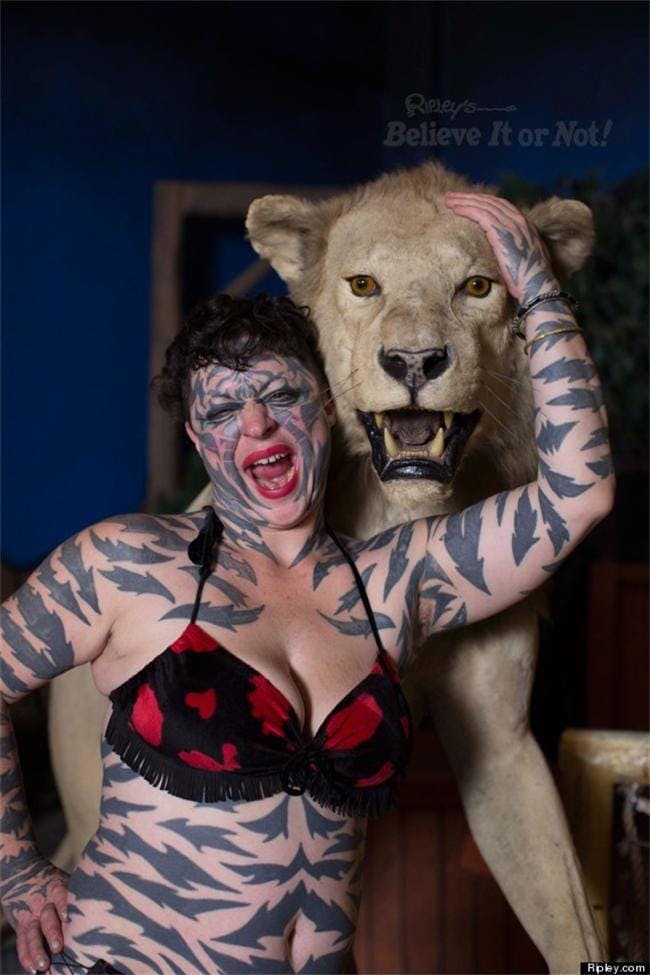 She was said to have fainted on one occasion due to the pain and pressure put on her. 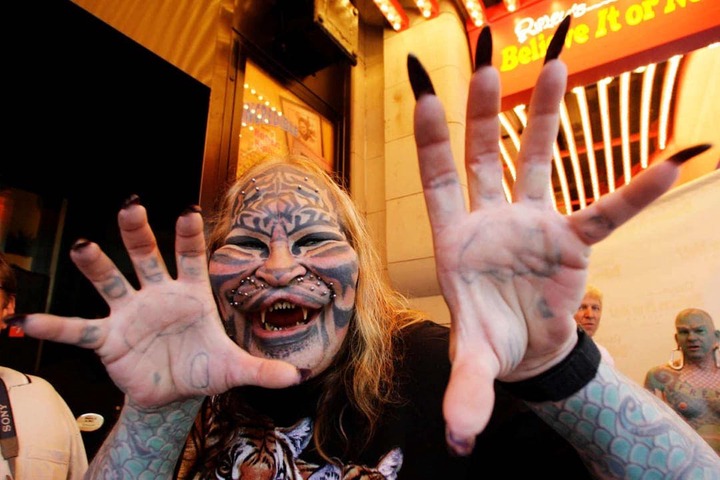 Dennis Avner (Late), is one of the most recognized faces of body modifications. He spent so many years trying to fit into the looking like a female cat, a female tiger to be specific. 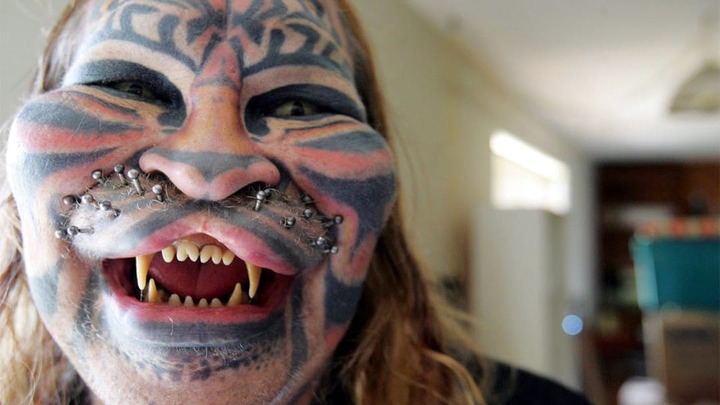 His wish to "become a tiger" was sparked up by a conversation he had with an Indian chief who told him to "follow the ways of the tiger". He committed suicide in 2012. 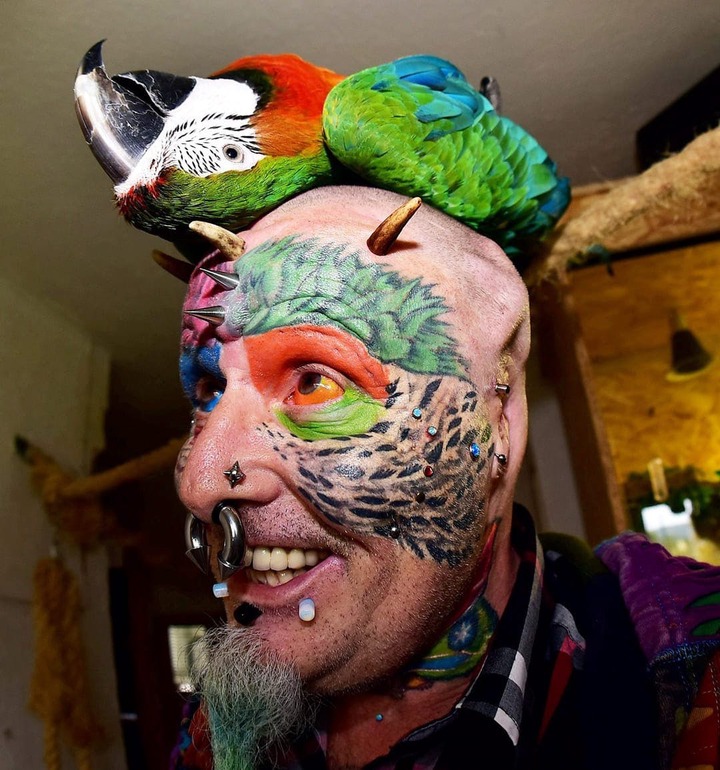 Ted Richards who is a retired shoe factory worker, has plenty of love to give to his pet parrots. It's not the normal pet owner kind of love. He wants to be like his pets. 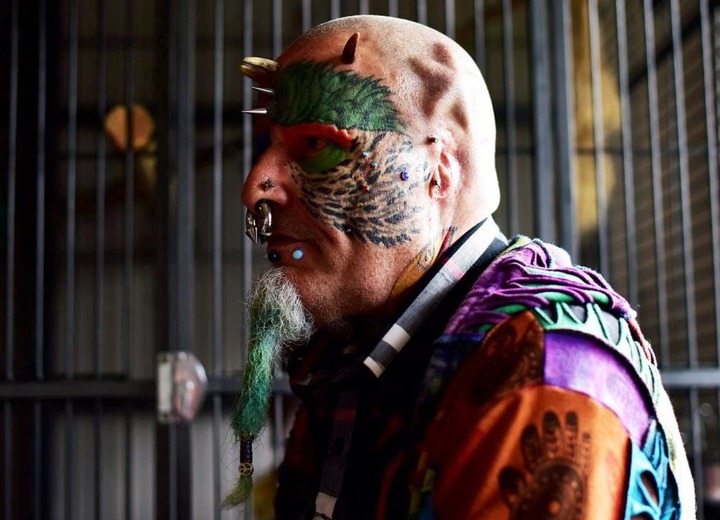 Which is exactly why he got both ears cut off and had several dermal implants. He even inked his eyeballs several shades of peculiar. The 56 year old currently has over 110 tattoos, 50 piercing and a split tongue. He's presently looking for a surgeon to turn his nose into a beak.

Since my favourite animal is a snake, i think i should cut my arms and legs off...

Stop Coming To The Gym With Body Odour – Kiddwaya Warns

Are You People Not Tired Of Seeing Shege? - Mr Macaroni Ask As He Wonders Why Fuel Scarcity Persists In 2023