Article written by actress Mercy Johnson Okojie…
My picture and that of my daughter, Purity in a Lagos train has surfaced online and quite a number of people have asked me what I was doing in a train and in Lagos for that matter; not Paris or London.

I was around Iddo at Ebute Metta when my Range Rover developed a mechanical fault and I had to make a very important appointment in Ikeja regardless of the usual traffic congestion in Lagos.

Luckily, a member of my management team was around, he suggested a train ride and we were in Ikeja in less than 30 minutes but that is not the crux of this statement.

Like I mentioned earlier, I have had to answer questions in private and public as to why I would board a train because trains in Nigeria are considered a means of transportation for the ordinary and not-so-rich people. 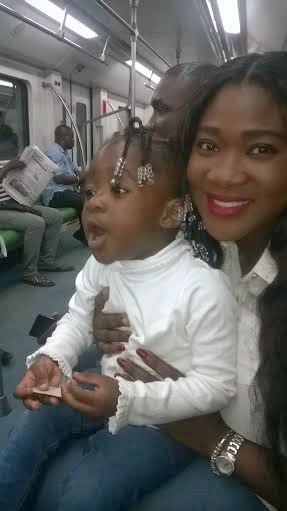 [ads4]
A friend called and said I just devalued my brand by being on the train with ordinary people. I couldn’t help but laugh.

Are we extra ordinary people because we are celebrities?

In as much as I understand the concept of branding, packaging and exclusiveness, I will never trade the experience to sit, interact and feel the pulse of so-called ordinary people.

Why would I avoid them now? Would that be because I am now famous?

Without these ordinary people, how would I have been famous in the first place?

Without the so called ordinary people, where would Nigeria’s growing population of so-called well packaged celebrities be today?

For the purpose of clarification, I was not on that train due to lack of money to get a well packaged cab or to get somebody to bring another car from the house but, my car developed an unforeseen fault and I needed a fast , reliable and convenient alternative immediately as there was urgent business to be attended to and I respect time a lot.

The train was available where I was; most importantly, I did not want to turn down the opportunity to be with the people who would ordinarily not have access to me so I grabbed the opportunity with both hands and here we are.

I want to thank my co-passengers, officials of the train for treating me with absolute respect and courtesy, I am indeed, very grateful.
Betting Tips on Whatsapp News Updates
Subscribe to Youtube
Related forums

Career & Net Worth Of Mercy Ebosele