I can Act N.udé if the Story Goes with it –Actress Tessy Oragwa

Beautiful actress Tessy Oragwa has proved that she is one of the next actress to watch in the industry.

Despite her parents’ attempt to thwart her career because of the wrong impression of actresses in the movie industry, she tells The Sun’s Christian Agadibe how far she can go in business of “rough” acting.

What challenges did you encounter when you started? It was really challenging just like every business comes with its own challenges. I could remember a time I got a job for a very good role after going for the auditions from the outset. I was inside the location bus when the EP talked to the PM and the Production Manager came to tell me that the Executive Producer said that I didn’t look like Eucharia Anunobi and that they have someone who looks very much like her, and that was the person he wanted.
I accepted, dropped the script, came down and went back home.

How did you feel?
I felt bad, because I really gave my best right from the audition and got the role.

Maybe the other actress has features more than you do as Anunobi?
Excuse me. The person that it was given to, how is she? She does not look an inch of Eucharia Anunobi. Please, don’t even go there because I don’t want to talk about that issue.

Are you sure it’s not because of séx for role?
Honestly, I don’t know about that and I don’t dig into people’s lives, but for my side, there was no approach because I went for the job. The Executive Producer wasn’t there when they were doing the auditions. 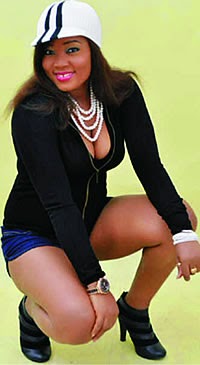 What’s your notion about séxual harassment in the movie industry?
There is no place where you wouldn’t find sexual harassment, you could as well find it in the banking industry. The reason it’s so pronounced in the entertainment industry is simply that it’s for entertainment and people’s eyes are on it. So, in as much as you are a woman, men would approach you and then if you feel you want to date him and have some fun, you go ahead; it’s your life. There is no discrimination about that, but don’t make it look like you are being harassed or forced to do what you do not want to do. You have a mind of your own and you are mature enough to take decisions.

Have you experienced producers asking séx for role with you?
No, I don’t think anybody would want to do such a thing to me. When you approach me and you are good, I might decide to take a decision and have my fun.

Are you into a relationship?
Don’t worry about my love life, I won’t like to discuss it, but when the right time comes, you would know. I’m single but not searching.

Does the lucky man in your life complain about your career?
Not at all, he loves my job.

If your husband tells you to quit acting,would you agree?
I don’t think such situation would occur, so I don’t even want to think about it. When we get to that bridge we would cross it, definitely. I think that a situation has ended a relationship for me before now but I just concluded that it wasn’t meant for me.

You look innocent, what would it cost for you to go nude?
Please, do not judge me by my looks, I could be crazy at times. I can act any part in a movie as far as it’s not a nude movie for my role determines what I do. As far as it’s not Nollywood, but I can go nude in Hollywood because I believe before Hollywood would request for such, they should have their reason for doing so. For Hollywood, I can go nude because the nakedness would go with the story and there must be something that prompted it, but here in Nigeria at a point we lost it and portray nudity without having stories going with it.

I Am No Longer An Actress - Caroline Hutchings