Super Eagles midfielder, Ogenyi Onazi, on Friday fell victim to hackers as he lost his Facebook account to hackers..

Now, the footballer has revealed his surprise at the hacker’s request to be ‘shown love’.

Onazi revealed on Saturday via his official Twitter page that his hacker, through a friend sent a feedback following the attack on his social media page.

“My Facebook was hacked and when I ask my friend to chat him up this is his response, what is really happening? We all need to be careful.”

The hacker wrote in a message;

“Just show us love, i don’t need the account for anything. Hunger dey Nigeria”,

See the message below: 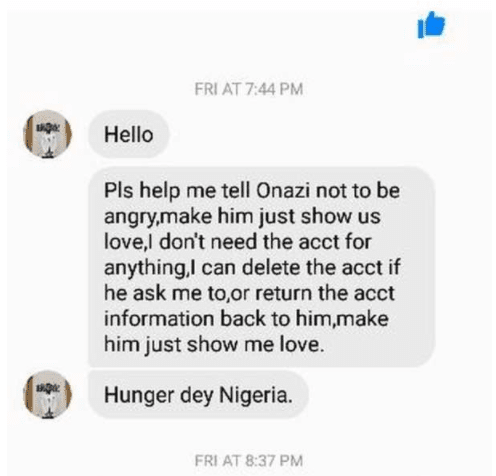 DO YOU AGREE? Nigeria iPhone Users Are Like “A Dot In A Circle” & Mentally Enslaved (See How)