Photo: Bale Is The Most Expensive Footballer In The World Not C. Ronaldo, Leaked Transfer Doc Reveals

Real Madrid signed Cristiano Ronaldo from Manchester United for £83million in 2009, and then broke the bank again to sign Bale in 2013.

Real Madrid president Florentino Perez made claims sometime ago that Cristiano Ronaldo was still the most expensive player in the world, saying Ronaldo bought at 83 million pounds was more expensive than Gareth Bale because of the higher exchange rate during Ronaldo's transfer.

When asked about Bale being insured for £78million, Florentino Perez said: "Yes, sure. It's a life insurance, against accidents. Bale is insured for the amount he cost."

But transfer documents detailing the real cost of Gareth Bale's transfer has now been leaked to the media and are in total contrast to Real Madrid's president's claims. 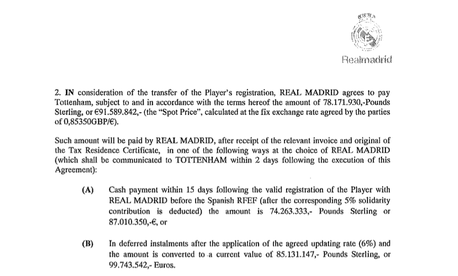 The transfer document, released byFootball Leaksshow that the total cost for Bale was actually €99,743.542, which at the 2013 exchange rate was £85,131,147 a sum higher than that of Cristiano Ronaldo when he moved from Manchester United.

Jonathan Barnett, who represents Bale, has called the leak "outrageous" and demanded that the source of the leak is investigated.

Barnett said to The Telegraph :
“There should be an inquiry and an independent investigation … I think it’s disgraceful that people can get hold of this sort of stuff. It shows complete disregard for both clubs and the player.” 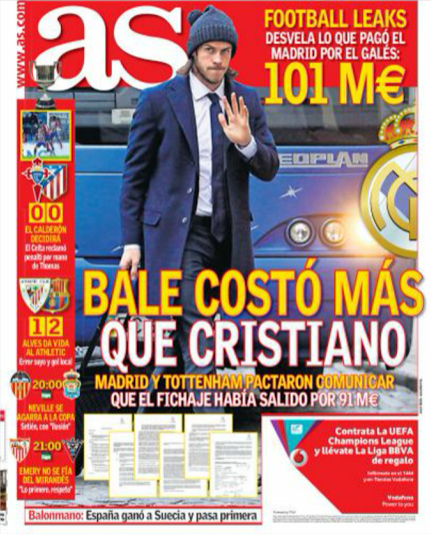 It is believed in some quarters that REAL Madrid president Florentino Perez said Ronaldo was more expensive than Bale because he didn't want to bruise the Portuguese's ego.
Subscribe to Youtube
News Updates
Related forums

Forum
TRANSFER LATEST!! Lyon Informs Arsenal How Much Aouar Will Cost After 3 – 1 Loss To Liverpool
1 day ago

Ketchup – What Would You Do (Video)
1 day ago

A beautiful Thorn
3 days ago

Soulfreakah – A Cure For Heartache
21 mins ago

Godion – Only You ft Zoro
5 hours ago

Demi Lovato – Still Have Me
17 hours ago

FunnyBlizz Comedy - Why Men Die Before Women
1 hour ago

Record Of Youth
21 hours ago