Five days ago Arsenal made themselves favourites to take the Premier League title with their 2-1 victory over Manchester City, but all the old doubts about Arsène Wenger’s brittle Gunners resurfaced on Saturday night.

Facing a Southampton team short of confidence and goals, Arsenal knew that a fifth successive win in all competitions would put them on top of the table thanks to Leicester City’s defeat by Liverpool at Anfield earlier in the day. But they were unable to grasp the prize.

Instead, Southampton responded to last Saturday’s dismal loss at home to Tottenham Hotspur by inflicting a fourth Premier League defeat of the season on Spurs’ North London neighbours, who have not won at St Mary’s since December 2003.


Cuco Martina, playing because of an injury to regular right-back Cedric Soares, put Saints ahead after 19 minutes of his first Premier League start with a stunning strike that seemed to knock the stuffing out of them. Shane Long added a well-deserved second before Southampton’s captain Jose Fonte continued what was looking like a rout with a third and Long wrapped it up late on.

Wenger’s men stumbled here on New Year’s Day last season, losing 2-0 to goals from Sadio Mané and Dusan Tadic. But that was a Southampton team on its way to a seventh-place finish. This was a first win in six matches for Ronald Koeman’s side, Martina’s opener only their third goal in six matches.

Arsenal must have expected a Southampton backlash after the Spurs match, but that does not explain the scale of Arsenal’s capitulation. Once Southampton had gone ahead, Arsenal could not find the character to reply. Wenger’s men now face home matches against Bournemouth and Newcastle and anything other than six points will be a further blow to their chances.

Arsenal kicked off knowing that Christian Benteke’s winner for Liverpool had opened the way to pole position and that Graziano Pellè, Saints’ top scorer with nine goals, was absent with a knee injury from a Southampton team showing four changes from the reverse at home to Tottenham, including a rare appearance for Dutch-born Curacao defender Martina, signed in summer from FC Twente for £1m. 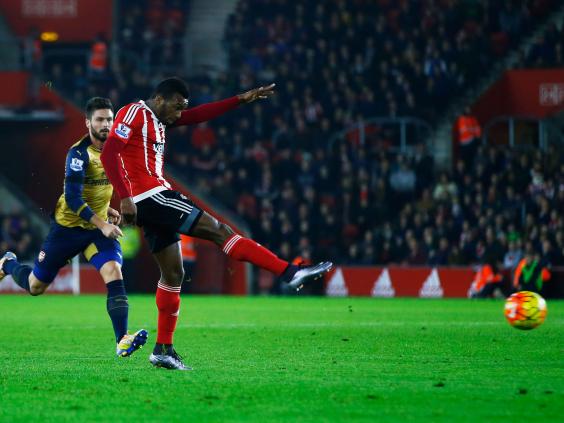 The visitors, in contrast, were unchanged from the victory over Manchester City and looked fully in control in the early stages. They had a chance to take the lead with their first attack as Olivier Giroud met Mezut Özil’s corner from the left with an unchallenged header but directed the ball high over the crossbar.

Then Nacho Monreal, found in space on the left by Aaron Ramsey’s diagonal pass, saw his cross almost deflected over the head of Maarten Stekelenburg, Giroud and Theo Walcott almost broke through after exchanging passes, and Monreal hit a shot straight at Stekelenburg after Martina’s weak attempt at a headed clearance had dropped at his feet.

But any doubts about Martina disappeared in the 19th minute as he put Southampton ahead in spectacular style. There seemed no danger as Per Mertesacker nodded away a cross from the left, the ball travelling 30 yards from goal. Martina, though, strode on to it and met it first time with the outside of his right foot to send his shot swerving back past the right hand of the diving Petr Cech and into the far corner of the net.

There was a second of stunned silence before the roof nearly came off St Mary’s and for a while Arsenal, previously composed in defence, looked rattled. Shane Long was chasing every pass and putting pressure on the back four. 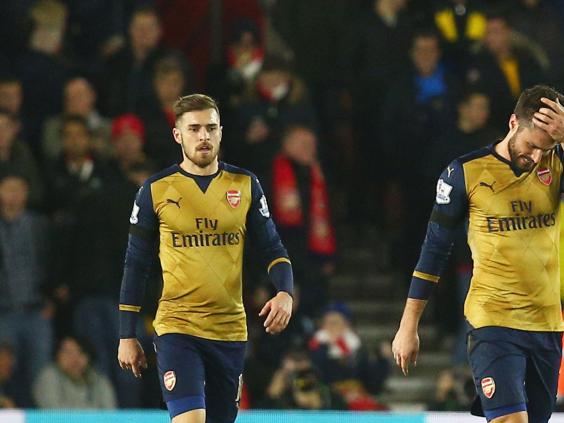 Arsenal still looked dangerous when they got near the Southampton goal, and Walcott, also unchallenged, nodded Özil’s corner wide at the near post. But those moments were now infrequent, and in the 43rd minute it should have been 2-0 as Long ran on to Sadio Mané’s pass, accelerated past Mertesacker and bore down on Cech only to lift his shot over the bar and into the seats instead of into the net.

If anyone had doubted it, this was turning into a serious test of Arsenal’s title credentials and only Jon Moss, the referee, will know how Laurent Koscielny escaped a yellow card for a bodycheck on Mané in the 50th minute. And when the resulting free-kick was floated in by James Ward-Prowse, only the most marginal of offside decisions ruled out a “goal” as Virgil van Dijk glanced a header past Cech.

But a second goal had only been delayed. In the 55th minute, Long played the ball out to Mané on the right and ran for a return pass, clipping the heels of Koscielny, his marker, as he did so. The Frenchman fell to the St Mary’s turf, leaving Long unmarked to sweep Mané’s low cross past Cech.

It was 3-0 after 69 minutes as Arsenal’s frailties were ruthlessly exposed. Ryan Bertrand curled in a corner from the right, and Fonte attacked the ball with a d0esire that no defender could match, leaping between Mathieu Flamini and Koscielny to bullet home a header.

Long deserved another goal, and after his 89th-minute shot came back off a post, he got it with a low shot.

BBNaija: I Miss My Boyfriend So Much, Dream About Him – Nini Reveals

The Girl Who Killed Her Parents (2021) (Portuguese)