Henry was one of the greatest, but not always the most loved

COMMENT: The retired striker was a star in many nations but remains underrated in his homeland of France

Thierry Henry’s retirement from football at the age of 37 was met with glowing tributes, none more so than on this site.

He will be best remembered for his heroics at Arsenal but also shone for Barcelona and won the World Cup and European Championship with France.

Yet it is his own country where he is arguably less popular than the others in which he played. There are a few factors for this…

Robin Bairner, Goal French football writer: “As Emmanuel Petit pointed out following Henry’s decision to depart New York Red Bulls, he is a player who has not always been fully appreciated in his homeland. Much of this has been driven by a frosty relationship with the media, which began at Monaco early in his career when a move to Real Madrid broke down. It continued most spectacularly after his ‘Hand of Gaul’ against Ireland and the infamous World Cup player strike of 2010.”

Johann Crochet, chief editor Goal France: “That handball against Ireland in 2009 meant a lot of French people were not proud of qualifying. Not only did he cheat, but he reacted poorly afterwards, chatting away with Richard Dunne. A second issue is his perceived arrogance – if French people call you arrogant then you must be doing something wrong, And the way he celebrated his goals – or rather the way he didn't – made him look bored to fans. So he hasn't been as popular as his performances on the pitch should demand. Yes, the French recognised his talent, and the decisive goals he scored for Les Bleus. But was he popular? No, not at all.”

Federico Casotti, chief editor Goal Italy: “Thierry Henry's spell in Serie A was brief and not fully successful. There's a unanimous feeling that Henry left too early: Carlo Ancelotti - at that time the Juventus coach - fielded him as a winger, thus heavily limiting his potential, which clearly emerged at Arsenal. Years later, Ancelotti admitted that his treatment of Henry was his biggest mistake ever, while the Frenchman, although well settled at Arsenal, always expressed regrets about that Serie A experience, which was too short for his expectations. In December 2001 he faced and scored against Juventus, and his celebration was angry – like he was relishing the revenge over a team who didn't fully believe in him.”
[ads4] 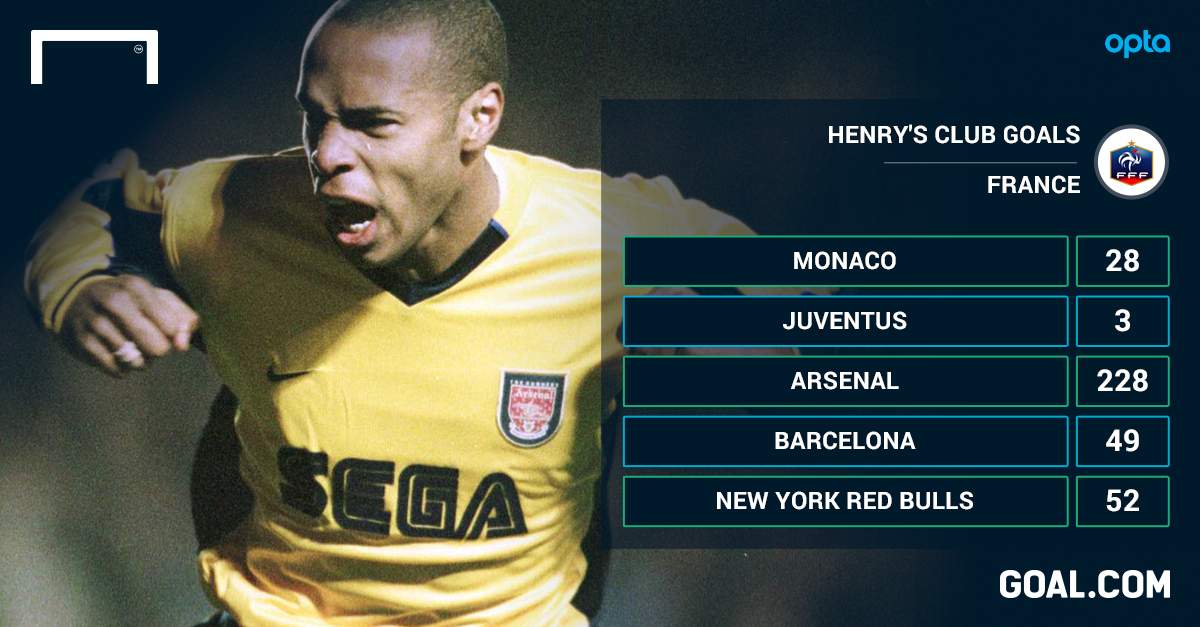 James Goldman, deputy editor Goal UK: “His statue outside the Emirates Stadium provides a permanent tribute to his goal-scoring prowess but his impact on the Premier League and English football will last just as long. Henry arrived in England as an erratic winger, wracked with self-doubt, at a time when forwards like Alan Shearer and Andy Cole, traditional penalty box predators, were dominating the scoring charts. By the time he left Arsenal for Barcelona following eight trophy-laden years, Henry had redefined the role of centre forward, providing the blueprint for the likes of Luis Suarez and Sergio Aguero. The totem of Wenger’s Invincibles he helped, for a time, turn Arsenal into best team in the land. More than that, however, he made them relevant, respected, fashionable. As legacies go, it will take some beating.”

Ben Hayward, Goal Spanish football writer: “Thierry Henry’s 2007 move to Barcelona was initially disappointing. Even though he played alongside Ronaldinho, Lionel Messi and Samuel Eto’o, as Frank Rijkaard's final season as boss ended in trophyless failure. Henry still scored 19 goals in 47 matches, mostly from the wing, and things improved when Pep Guardiola arrived. An in-decline Ronaldinho left, Henry stayed and - with Messi and Eto’o - formed what is considered to be Barca’s best forward line in the Guardiola era. He hit 26 goals – including two in the memorable 6-2 win at Real Madrid – as Barca claimed a treble of Liga, Copa del Rey and Champions League. The next season was his last and brought just four goals, but Henry ended his Catalan career with seven trophies (including six out of six in 2009) and despite his short stay, is fondly remembered for playing an important part in the most successful side in Barcelona’s 115-year history.”

Jon Arnold (USA): “Plenty of players come to Major League Soccer from Europe to finish their careers, but none were as successful on the pitch as Thierry Henry. It wasn't as glorious as his Arsenal days, and opposing fans ridiculed him for neglecting to play on many artificial surfaces, but on his best days it looked like the 37-year-old hadn't missed a beat. He helped the New York Red Bulls to the 2013 Supporters' Shield, but was never able to hand the club a first MLS Cup. His disappointment was evident when his final press session was a simple "Well done, New England," congratulating the team who denied him MLS' biggest prize. He had given it his all, something that can't be said about every foreign signing in the league. But while Henry won't be remembered as the most prominent European import (that role will always fall to David Beckham) for now he will be remembered as the best.”

I Loved Women, Party Too Much – Drenthe Reveals Why He Failed At Real Madrid

Reno Omokri: Peter Obi Is The Greatest Contributor To Consumption In Nigeria.